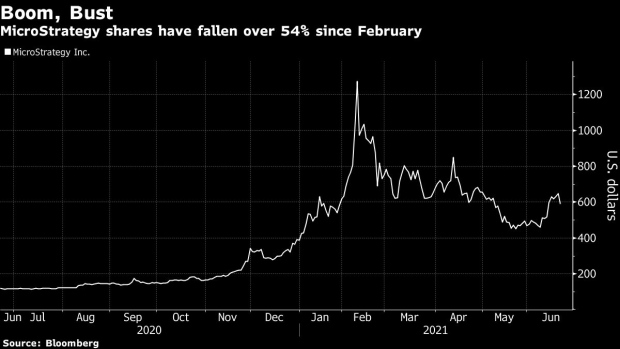 Michael Saylor speaks during the Bitcoin 2021 conference in Miami, Florida, on June 4. , Bloomberg

The Tysons Corner, Virginia-based enterprise software company said Monday that it purchased an additional 13,005 Bitcoins for about $489 million in cash at an average price of about $37,617 per Bitcoin. The news did little to slow a dramatic slide in the world’s largest cryptocurrency, with prices slumping nearly 10% to roughly $32,300.

As a result of the freefall, MicroStrategy may have to mark down the value of the Bitcoins it just purchased. Accounting rules dictate that the firm will have to write down its holdings once the market value dips below the price at which it acquired the coin. Bitcoin touched an intraday low of $31,735 on Monday, meaning that MicroStrategy may incur a nearly $77 million charge, according to data compiled by Bloomberg.

While $77 million may seem like a trivial amount for a $5.7 billion company, MicroStrategy’s net income from 2018 to 2020 was just $67.6 million. That’s in addition to the roughly $284.5 million charge it will take in its next earnings report, according to a filing earlier this month. That will bring the company’s total Bitcoin-related impairments to more than $500 million, according to its filings and data compiled by Bloomberg.

It’s a painful twist of fate for MicroStrategy, which has emerged as the cryptocurrency industry’s biggest corporate advocate with Michael Saylor at the helm. The company owns over 105,000 Bitcoins after making its initial purchases last summer, and has issued over $1.5 billion in convertible notes and junk bonds to fund that buying.

MicroStrategy shares are still nearly 400% higher over the past year, thanks largely to Bitcoin’s rally. However, the stock has dropped 54% since February’s peak, and fell another 9.8% on Monday to mirror Bitcoin’s plunge.