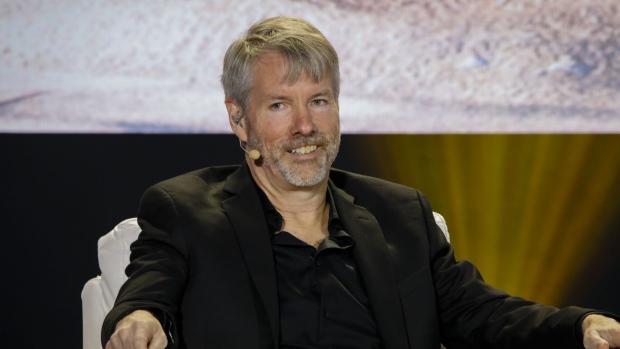 (Bloomberg) -- Financial markets are unprepared for Bitcoin-backed bonds, according to MicroStrategy Inc. founder Michael Saylor, the most vocal advocate of companies adding the cryptocurrency to their balance sheets.

“I’d love to see a day where people eventually sell Bitcoin-backed bonds like mortgage-backed securities,” Saylor said in an interview Tuesday after the software maker announced that it was taking a loan to buy more of the digital asset. “The market is not quite ready for that right now. The next best idea was a term loan from a major bank.”

That may serve as a warning to El Salvador, which is planning to sell about $1 billion of so-called volcano bonds that will be backed by Bitcoin. While the proposed offering has been the talk of the crypto industry since it was first proposed last year, the nation’s Bitcoin advocating president, Nayib Bukele, has delayed offering the securities.

“There’s a lot of talk about the El Salvador Bitcoin bond,” Saylor said. “That’s a hybrid sovereign debt instrument as opposed to a pure Bitcoin-treasury play. That has its own credit risk and has nothing to do with the Bitcoin risk itself entirely.”

The $205 million loan, which will be backed by MicroStrategy’s Bitcoin holdings, was the best possible course for shareholders after exploring a slew of financing options, Saylor said. They included issuing Bitcoin-backed bonds, tapping DeFi or decentralized finance tools and loaning out its stash of digital assets.

“If it was JPMorgan and it was their balance sheet at 4% interest, I’d probably do that deal. But if a hedge fund or operation doesn’t have 100 times my balance-sheet, then there’s probably theoretical counterparty risk offsetting nominal yield,” Saylor said.

Saylor has effectively turned MicroStrategy shares into a leveraged play on Bitcoin. It owns about $5.9 billion of the cryptocurrency, based on Wednesday’s price of around $47,500.

“At every scale anybody can readily use Bitcoin as their fulcrum and leverage is plentifully available to every corporation in the world right now. Municipalities could do it,” he said. “New York can issue $2 billion of debt and buy $2 billion worth of Bitcoin -- the Bitcoin is yielding 50% or more, the debt costs 2% or less.”