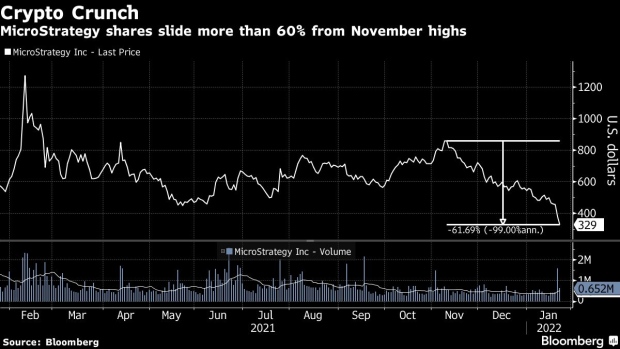 (Bloomberg) -- The slide in MicroStrategy Inc. shares deepened, with the two-day decline now the largest in more than two decades, as investors reassess the company’s Bitcoin buying strategy in the wake of an unfavorable accounting ruling by the Securities and Exchange Commission.

The Tysons Corner, Virgina-based enterprise software maker run by Michael Saylor, which said in 2020 that buying and holding Bitcoin was one of its key business strategies, used non-GAAP measures in its Form 10-Q for the quarter that ended Sept. 30, 2021, to show investors what its income would have been if it didn’t have to impair the volatile cryptocurrency. The SEC objected, a comment letter released Thursday shows.

Investors may get their first view of the consequences from the decision when MicroStrategy releases fourth-quarter results on Feb. 1. While Bitcoin has continued to fall since the end of the last quarter, additional changes in future results will be dependent on factors such as the timing and price of purchases.

“We saw weakness in December, but January is when we saw the most significant decline,” said Mark Palmer, an analyst at BTIG, who has a “buy” rating and a price target of $950 on the shares.

The impairment are an accounting quirk that shouldn’t matter to investors, because it does not stand to change MicroStrategy’s valuation, according to Palmer. He is focused on how much cash the company’s business intelligence software is throwing off.

“That business represents the company’s valuation, albeit lesser than its Bitcoin holdings, because that’s the engine of cash flow that will be redeployed to the purchase of more Bitcoin,” he said.