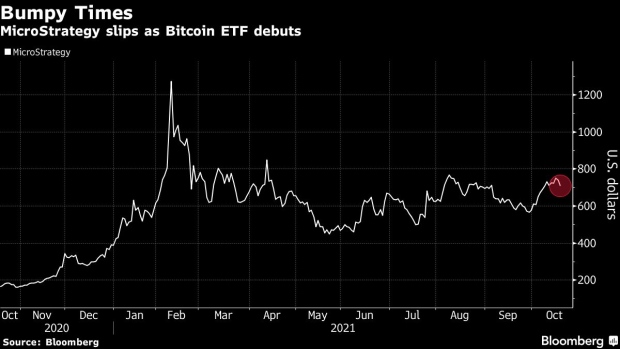 (Bloomberg) -- MicroStrategy Inc.’s cryptocurrency bet hit a bump on Tuesday when the launch of the first Bitcoin-linked exchange-traded fund in the U.S. drew investors away from some companies with exposure to the digital currency.

The tech company fell 2.7% to $719.38 at 10:55 a.m. in New York as the focus shifted to the highly-anticipated start of trading in ProShares Bitcoin Strategy ETF, which raised questions about the need to buy a stock that serves as a vehicle to invest in Bitcoin.

The company held about 114,042 Bitcoins as of Sept. 12, according to a tweet from Chief Executive Officer Michael Saylor. Saylor, a vocal Bitcoin bull who has adopted the laser-eyed profile picture popular with enthusiasts on Twitter, tweeted more praise for the crypto ahead of the session’s market open Tuesday.

While MicroStrategy shares are up more than 330% in the past year, those gains trail Bitcoin’s 432% return over the same period. Tuesday’s weakness leaked over to Bitcoin miners including Marathon Digital Holdings Inc. and Canada-based Bitfarms Ltd., with both falling more than 5%.