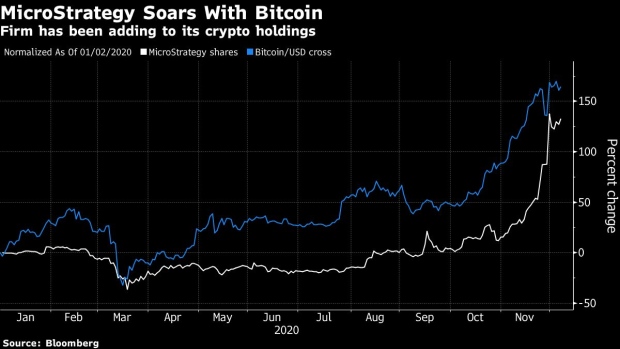 (Bloomberg) -- MicroStrategy Inc. is doubling down on its Bitcoin bet, saying Monday that it plans to offer $400 million of convertible bonds in order to buy more of the cryptocurrency.

The proceeds from the offering will be invested in Bitcoin “pending the identification of working capital needs,” the Virginia-based company said in statement.

MicroStrategy bills itself as a business-intelligence firm but has been doubling down on its capital-allocation strategy disclosed in July, which includes investing up to $250 million in assets including Bitcoin.

MicroStrategy bought more of the cryptocurrency on Dec. 4, saying in a filing that it now has about 40,824 Bitcoins in total.

The stock has doubled since the beginning of November as the price of Bitcoin has also surged. It slipped 3.3% in postmarket trading Monday.