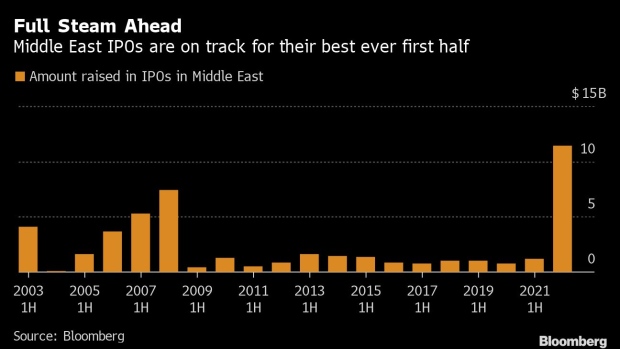 Initial public offerings in the Middle East are on track for their best ever first half as high oil prices and foreign inflows shield the region from the volatility that has scuppered listings worldwide.

IPOs in the Middle East have fetched $11.4 billion in the first five months of the year, already eclipsing the amount raised in any other first half, data compiled by Bloomberg show. The tally is only set to increase, with petrochemicals company Borouge starting trading in Abu Dhabi on Friday after raising $2 billion.

The energy-rich region is a rare bright spot for IPOs this year, with a 50% surge in oil prices boosting Gulf economies and stock markets. While share sales have plunged to a two decade-low in Europe because of roaring inflation, rising interest rates and a grim economic outlook, the Middle East has largely escaped the turmoil and has attracted investors from elsewhere.

“IPOs have held up very well in the GCC due to high interest from international and regional investors in recent offerings and in the upcoming ECM pipeline,” said Rudy Saadi, head of ECM in the Middle East and North Africa at Citigroup Inc. “We’ve seen continuous net foreign inflows across all GCC exchanges, even during the recent selloff, a sign that foreign investors are buying this market despite the global volatility.”

After South Korea’s LG Energy Solution, the second-biggest IPO of the year globally came out of Dubai, where its main utility raised $6.1 billion and drew orders worth $86 billion from investors. The emirate is making a push to list state-owned assets, with a string of others in the works, in an effort to boost trading activity.

Borouge’s offering in neighboring Abu Dhabi was even more successful than Dubai Electricity & Water Authority, with its orders of $83 billion amounting to an oversubscription level of almost 42 times.

Gulf IPO activity held up even as regional stock markets sold off sharply in the past month. Markets in the Middle East are still some of the best performing in the world this year, with Saudi Arabia’s Tadawul up 13% and Dubai’s benchmark up 6.6%.

The outlook for the rest of the year remains bright, barring any major shocks like a sharp drop in the oil price. A number of billion-dollar-plus offerings are lining up in Saudi Arabia, the Middle East’s biggest IPO market, while Dubai is set to continue its listing spree.