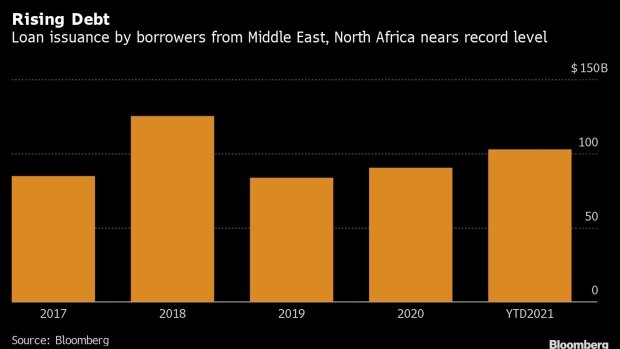 Companies from the Middle East and North Africa region look poised to raise record sums from loans as progress with vaccination and partial reopening of tourism spurs investment.

The United Arab Emirates is among countries that have been easing travel restrictions while Saudi Arabia has been rising in Bloomberg’s latest Covid resilience rankings.

Firms from the region have borrowed $103 billion of loans so far this year, already surpassing the $90 billion sought in the whole of 2020. With the jump in oil prices also providing an economic boost, loan arrangers see a good chance that volumes will at least match the $125 billion record for the region seen in 2018.

“Market activity has picked up especially in the second half of the year as the pandemic effects began to ease,” said Fawaz Abu Sneineh, acting head of global corporate finance with First Abu Dhabi Bank PJSC. “Increased liquidity has resulted in competition between banks, enabling the stronger borrowers, particularly sovereign and quasi-sovereign entities, to raise financing on more borrower friendly terms compared to the previous twelve months.”

Saudi Arabia’s sovereign wealth fund has sealed the largest loan deal so far this year, with a $15 billion revolving facility from 17 banks in March.

“The pool of liquidity is also expanding to include Asian and European involvement as well as regional lenders, even for tighter-priced facilities in the private sector space,” said Aydın Emek, Head of Loan Syndicate & Distribution, Middle East North Africa & Turkey, with HSBC Holdings Plc.