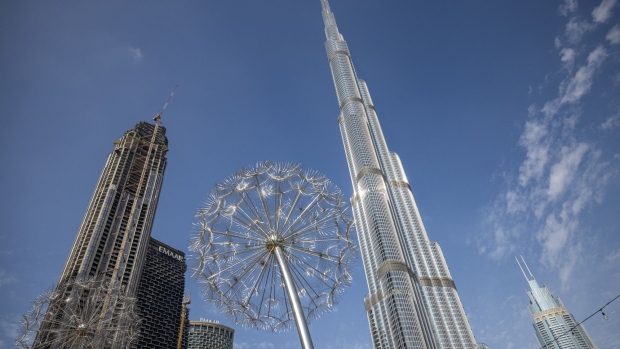 The Burj Khalifa skyscraper, in Dubai, United Arab Emirates, on Sunday, Jan. 2, 2022. Dubai set out another expansionary budget for this year as the Middle Eastern business hub seeks to offset the impact of the coronavirus pandemic and keep its economy on a growth trajectory. Photographer: Christopher Pike/Bloomberg , Bloomberg

(Bloomberg) -- Teneo poached two executives from AlixPartners LLC in Dubai, marking its entry into the fast-growing Middle Eastern market for financial advisory and restructuring as competition builds in the region.

The New York-based firm hired restructuring veterans Matthew Wilde and Elie Fakhoury to lead its local turnaround practice, according to a statement Monday. Backed by CVC Capital Partners, Teneo already employs 80 people in the Middle East in areas such as risk advisory, communications and management consulting, with offices in Dubai, Doha and Riyadh.

Wilde, who formerly led PwC’s turnaround and corporate finance teams in the region, is one of the Middle East’s best-known restructuring specialists. He was involved with several prominent cases including the restructurings of developer Arabtec, hospital operator NMC Health and Dubai World. Fakhoury has worked with clients such as private equity firm The Abraaj Group and Arabtec.

The biggest turnaround firms have been on a hiring spree in the Middle East during the last two years in anticipation of more work linked to the impact of the coronavirus pandemic on the region’s economies. Alvarez & Marsal Inc., Houlihan Lokey Inc. and Deloitte, among others, all beefed up their regional presence.

“The Middle East represents a significant opportunity for our business and we look forward to continuing to grow our regional team and offering in the weeks and months ahead,” said Daniel Butters, head of Teneo’s financial advisory business

Teneo is a relative newcomer in the world of restructurings. It bought Deloitte U.K.’s insolvency practice less than a year ago and recently acquired KPMG’s restructuring business in the Cayman and British Virgin Islands.

Earlier this month Teneo appointed Jay Goffman, who held a senior role at Rothschild & Co., for its financial advisory business.