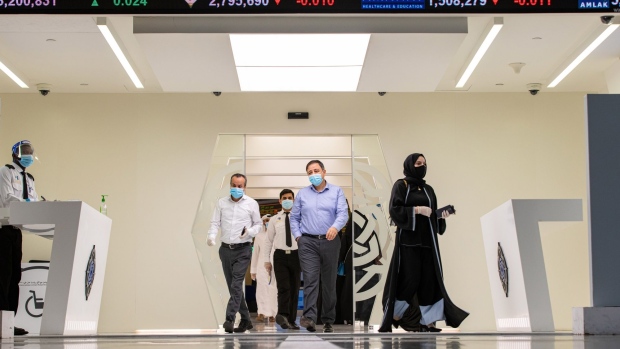 Visitors wearing protective face masks exit the Dubai Financial Market PJSC (DFM) in Dubai, United Arab Emirates, on Sunday, Sept. 6, 2020. Dubai made a rare foray into public bond markets, revealing along the way that its debt burden is now a lot smaller than estimated by analysts only months ago. Photographer: Christopher Pike/Bloomberg , Bloomberg

(Bloomberg) -- The main equities gauge in Riyadh climbed while those in Kuwait and Abu Dhabi fell after leaders from Russia and the kingdom discussed the OPEC+ agreement over the weekend and indicated further cooperation to support oil prices.

The Tadawul All Share Index climbed as much as 0.4% on Sunday in Riyadh, extending an increase of 1.7% from last week. Gauges in Dubai, Bahrain, Oman and Tel Aviv also climbed, while those in Abu Dhabi, Kuwait and Doha fell as much as 0.4%.

Russian President Vladimir Putin and Saudi Arabia Crown Prince Mohammed Bin Salman spoke Saturday in what the Kremlin said was a continuation of an Oct. 13 conversation. The latest call came two days before several OPEC+ ministers are set to discuss the implementation of production cuts during a meeting of the so-called Joint Ministerial Monitoring Committee.

This week’s intensive oil diplomacy comes as coronavirus cases surge in Europe and the Americas, weighing on the outlook for demand over the next few months.

Both demand and supply risks are of concern, said Hootan Yazhari, managing director of equity research at BofA Securities. “Certainly what we are seeing is demand for jet-fuel pulling back,” he said in an interview with Bloomberg TV on Sunday. Still, “we are concerned about demand, particularly given the re-emergence of the second wave across Europe.”