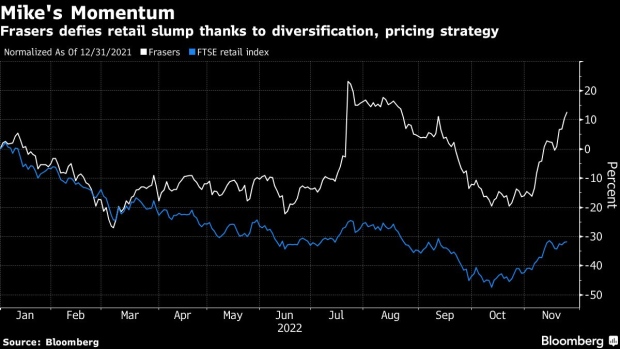 Frasers Group Plc is defying a slump in UK retail stocks, in a sign that Mike Ashley’s campaign to turn the firm into the “Selfridges of Sport” is starting to pay off.

Frasers is on track to be the only stock in the FTSE 350 Retail Index to have risen this year, jumping 15% year-to-date while the benchmark has lost a third of its value.

Announced in 2016, Ashley’s plan was to take stores upmarket by offering more space to branded sportswear. The strategy unlocked access to more products, and allowed Frasers to add scale, Numis’s Georgios Pilakoutas and Simon Bowler wrote in a note to clients. Underlining its upmarket goals, Fraser’s on Friday bought Savile Row tailor Gieves & Hawkes, adding one of the best-known names in British suitmaking.

The Numis analysts started coverage on Frasers this month with a buy rating, and a 1,000 pence price target that implies a 12% gain from current levels. But they see potential for upside to this target, noting “the underlying cash generation of the group has not been fully appreciated.”

Frasers did not immediately respond to a request for comment.

Ashley, a flamboyant 57-year old billionaire, owns a 69% stake in Frasers, according to data compiled by Bloomberg. While no longer a director, the self-styled “power drinker” acts in an advisory role after his son-in-law Michael Murray took over as chief executive in May.

The firm’s resilience is striking at a time when most UK retailers are reeling from the country’s worst cost-of-living squeeze since World War II. The economy’s recession is forecast to see output contract by 2% and cost 500,000 jobs. Frasers boosted its profit outlook on Jul. 21, sending the stock up 27% on the day. Its outperformance propelled it into the the FTSE 100 index of top UK stocks.

Shares rose as much as 1.5% on Friday after the Gieves & Hawkes deal. Frasers has become one of the most acquisitive retailers on the high street, snapping up failing businesses.

RBC analysts including Richard Chamberlain say the group’s competitive pricing may give it an edge. They also reckon parts of the business, such as Sports Direct and the luxury Flannels brand, will shield the company from the full impact of the downturn, as they mostly target the youth market. Sports Direct is expected to account for around 75% of Frasers’ estimated revenue for 2023.

The Numis analysts agree, estimating that pricing at Sports Direct is 25% to 30% cheaper than at Amazon, Decathalon and Argos. Spending by younger consumers will be relatively resilient as this group tends to be less less concerned about rising energy and tax bills, they argue.

All that should boost revenues by 11% during the fiscal year ending in April 2023, with operating profits dipping 7%, analysts predict on average.

Still, Bloomberg Intelligence’s Charles Allen offered some caution. “Frasers Group is facing the same decline in consumer confidence as other retailers,” he wrote in a note ahead of the firm’s interim results due Dec. 8.