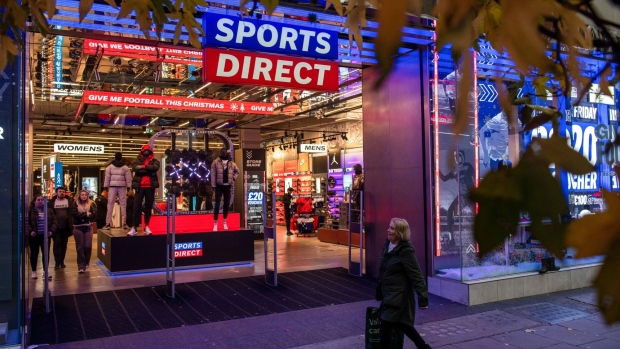 A shopper passes a Sports Direct Ltd. store on Oxford Street in central London, UK, on Tuesday, Nov. 29, 2022. UK retailers are cutting jobs and scaling back investment in response to mounting economic gloom, according to the Confederation of British Industry. , Bloomberg

Frasers, which owns Sports Direct and House of Fraser, is sticking to its goal of adjusted profit before tax at a record £450 million ($549 million) to £500 million for this financial year. The group said it had “strong strategic and trading momentum” at a time when many consumers are pulling back on spending.

The shares fell more than 3% in early trading in London.

Acquisitions are supporting the group’s performance with first-half revenue rising by 12.7%, but only 3.9% when takeover deals are stripped out of the numbers. The profit forecast is also being boosted by gains on property sales and foreign exchange movements, rather than profit from retail operations which fell 40% in the first half, said Bloomberg Intelligence analyst Charles Allen.

Founded by entrepreneur Mike Ashley, Frasers is now run by his son-in-law Chief Executive Officer Michael Murray who has introduced a strategy of upgrading stores. He wants to position Frasers to cater to both tighter budgets and bigger spenders with the Flannels brand selling luxury goods.

Murray is also following Ashley’s lead and driving a highly acquisitive strategy. Frasers, one of the only British retailers to see its share value increase this year, has snapped up struggling rivals including Savile Row tailor Gieves & Hawkes and online businesses Missguided and Studio Retail Group. It has increased its stakes in suitmaker Hugo Boss AG and fast-fashion hub Asos Plc. The company also recently bought Amara Living with a goal of developing luxury homewear for Flannels.

“It’s in the business’s DNA to be entrepreneurial and to acquire strategic acquisitions,” said Murray in a phone interview.

Frasers expects “many more” opportunities for acquisitions in the next six to 12 months and will look at those that have strategic value, Murray said. The group only considers acquisitions that “benefit our brand portfolio, our platform and operating capabilities or increase our distribution channels,” he added.

Murray said  his elevation strategy is starting to pay off and Frasers is getting more access to “must-have products.” “Consumers can choose to trade up to top level products or they can trade down to more affordable products in our own brands,” he said.

Frasers will invest about £600 million in a new distribution center and offices in Coventry over the next 10 years. As part of this plan the business bought the CBS Arena in the city, reportedly evicting Coventry City football club from the site.