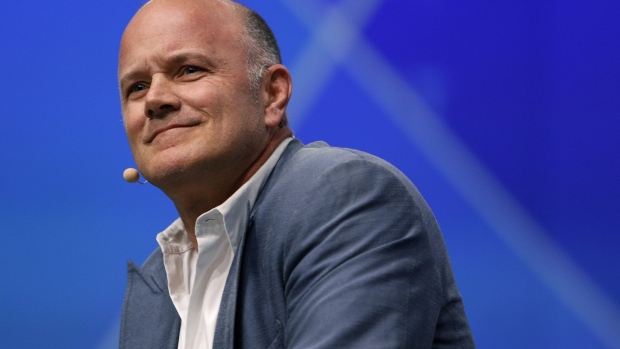 (Bloomberg) -- Michael Novogratz, the billionaire cryptocurrency investor who leads Galaxy Digital Holdings Ltd., said that while he still expects a volatile year, he has become more “constructive” about digital-asset markets than he was earlier.

“It wouldn’t surprise me to see crypto significantly higher by the end of the year,” Novogratz said during Galaxy’s earnings conference call on Thursday. “Given the adoption cycle I’m seeing, given the way markets trade, and how I see new people wanting to get in, the innovation we’re seeing in web3 and the metaverse space, I’ve gotten more constructive than I was at the beginning of the year.”

Galaxy, which offers businesses ranging from crypto trading and asset management to mining, said it “remains committed” to listing in the U.S. and expects to become a Delaware corporation between the second and fourth quarter, subject to the ongoing SEC review process, and to subsequently list on the Nasdaq. Galaxy had previously aimed for listing on a U.S. exchange in the first quarter of this year.

Net comprehensive income in the fourth quarter increased 55% to $521.3 million, due to “strong contributions” from trading and realized and unrealized gains from appreciation on digital coins and investments it holds. The company expects a loss of $110 million to $130 million in the first quarter through March 28, citing market volatility.

The crypto financial services firm renegotiated the terms for its acquisition of crypto custodian BitGo Inc. after the value of its shares slumped since the transaction was announced.

It will fund the $1.16 billion purchase with $265 million in cash and 44.8 million shares, up from 33.8 million shares under from the earlier agreement. BitGo shareholders will own about 12% of the company, up from 10% earlier. Galaxy shares, which trade on the Toronto Stock Exchange, had dropped about 30% since the transaction was unveiled in May. The shares fell 3% Thursday morning.

(Updates with Novogratz comments in the first paragraph. An earlier version corrected a reference to the stock component of the BitGo transaction.)