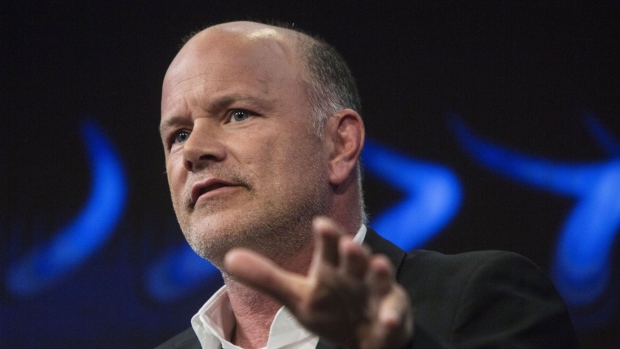 Michael Novogratz, founder and chief executive officer of Galaxy Digital Capital Management LP, speaks during the Bloomberg Invest Summit in New York, U.S., on Tuesday, June 5, 2018. The summit brings together influential and innovative figures in investing for an in-depth exploration of the challenges and opportunities posed by a rapidly changing financial landscape. , Bloomberg

(Bloomberg) -- Crypto custody firm BitGo said the termination of its acquisition by Mike Novogratz’s Galaxy Digital Holdings is “improper” and it plans to seek a $100 million termination fee.

Earlier, Galaxy said it’s ending its acquisition of BitGo in a $1.2 billion deal, citing the firm’s failure to deliver audited 2021 financial statements by July 31 to comply with requirements of the deal. No termination fee is payable, according to the Galaxy statement Monday.

BitGo has honored its obligations thus far, including the delivery of its audited financials, said R. Brian Timmons, a partner with Quinn Emanuel, a law firm representing BitGo.

BitGo intends to take legal action against Galaxy Digital for its “improper decision” to terminate the merger agreement, which was not scheduled to expire until Dec. 31, at the earliest and to not pay the $100 million reverse break fee it had promised, the company said in a statement.

Last May, Galaxy announced the plan to buy BitGo in a cash and stock transaction to broaden its institutional offering and geographic reach. The companies renegotiated terms after the value of Galaxy’s shares slumped. Toronto-listed Galaxy had planned to close the deal following its domestication as a Delaware corporation, which is subject to an ongoing US Securities and Exchange Commission review.

“We believe BitGo’s claims are without merit and we will defend ourselves vigorously,” a Galaxy spokesperson said in a statement. “As previously stated, BitGo did not provide certain financial statements needed by Galaxy for its SEC filing. Galaxy’s Board of Directors then made the decision to exercise its contractual right to terminate.”

“We are committed to continuing our process to list in the US and providing our clients with a prime solution that truly makes Galaxy a one-stop shop for institutions,” Novogratz, chief executive officer and founder of Galaxy, said.

BitGo was founded in 2013 by Mike Belshe, an engineer who’s previously worked on Google’s Chrome. It also offers trading, lending, and borrowing services through its prime brokerage. The company ended 2021 with over $64 billion assets in custody and client growth continues into 2022, Belshe said in a statement.