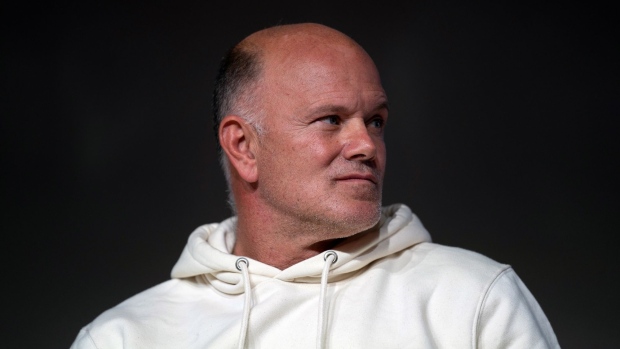 Mike Novogratz, chief executive officer of Galaxy Investment Partners, during a panel discussion on Secret Non-Fungible Token (NFTs) at the NFT.NYC Event in New York, U.S., on Tuesday, Nov. 2, 2021. NFT.NYC brings together over 500 speakers from the crypto, blockchain, and NFT communities for a three-day event of discussions and workshops. , Bloomberg

Novogratz’s Galaxy Gives is working with the Robin Hood Foundation, the Ford Foundation and other philanthropic groups to form NYC Speaks, a $2 million effort to solicit input from residents about what policies and initiatives Adams should prioritize when he takes office.

Over seven months, the initiative will conduct a citywide survey and a series of community discussions and planning workshops that will help inform Adams’s early policy moves and the city’s next budget, which is due next June. The public engagement effort is philanthropic in nature and separate from campaign financing or transition funding, which are subject to city rules on campaign spending.

“We got involved because we want to have more impact,” Novogratz said at a victory party at the Zero Bond members-only club in Manhattan on election night. “If you think about it, we haven’t had a mayor in a long time whose mission was so aligned with the Robin Hood mission. You literally close your eyes and think you’re talking to a Robin Hood leader.”

Novogratz, the chief executive officer of Galaxy Digital Holdings, is among the finance titans on the board of Robin Hood, a charity founded by hedge fund billionaire Paul Tudor Jones. Jones is one of the billionaires who donated to Adams’s mayoral campaign. After years of being iced out by term-limited Mayor Bill de Blasio, the city’s business leaders have embraced Adams as they look for a sympathetic ear.

Adams has leaned into that messaging, declaring that New York City would no longer be anti-business and pledging to reduce unemployment and bring workers back to offices. He’s received particular support from leaders in the crypto industry, including Novogratz and billionaire Brock Pierce. Adams has pledged to turn the city into a technology hub and take his first three paychecks in Bitcoin.

Still, Adams’s victory in the hard-fought Democratic primary came in large part thanks to lower- and middle-income voters from the city’s outer boroughs who were drawn by his promises to clamp down on crime, increase affordable housing and bring better social programs to the city.

Jose Serrano-McClain, co-executive director of NYC Speaks and a principal at HR&A Advisors, a consulting firm that helped organize the initiative, said he’s been charged to help Adams do just that.

“I’m excited to elevate the voices of community leaders and organizers across New York City so their priorities shape the future of our city, especially as we emerge from a pandemic that deepened inequality,” Serrano-McClain said in a statement.

Read More: NYC Business Leaders Wonder Which Side of Eric Adams They’ll Get

The initiative comes ahead of Adams’s key announcements on who will lead the public school system, health department and police. He also has yet to unveil a road map for his early days in office. Adams has pledged to make some announcements in early December, after he returns from a family trip to Ghana.

His spokesperson Evan Thies said in a statement that as Adams sets priorities for the next four years, “he is seeking the input of all New Yorkers who want to help improve our city.”

Public engagement initiatives are separate from the formal transition effort and do not provide the campaign with any financial support. Instead, the efforts can be used to identify important ideas and priorities for a new administration.

Ahead of de Blasio’s inauguration in 2013, a coalition of foundations led by George Soros’s Open Society Foundations created a similar group called Talking Transition and held a series of events at Manhattan’s Trinity Church to hear from residents on issues like property taxes, the city budget and wages for low-income workers.

Still, mixing nonprofit work with political business can raise questions. In 2019, three developers were fined for potentially violating lobbying laws after donating to a now-defunct nonprofit with ties to de Blasio, the Campaign for One New York. De Blasio denied any wrongdoing.

During Adams’s tenure as Brooklyn borough president, his nonprofit, the One Brooklyn Fund, faced scrutiny from the city’s Department of Investigation over its fundraising. Two probes concluded that the fund failed to comply with campaign finance rules.

Adams has refuted any claims of wrongdoing and told the New York Times in May that, “no campaign of mine has ever been charged with a serious fund-raising violation, and no contribution has ever affected my decision-making as a public official.”