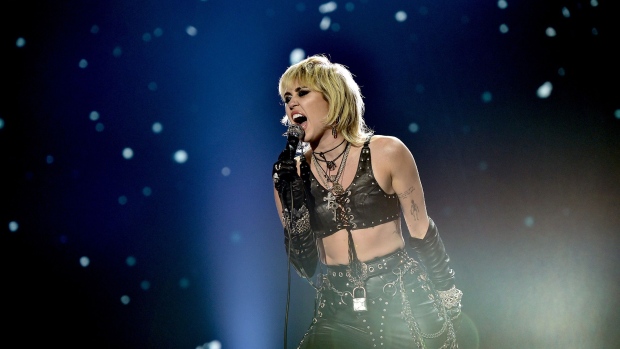 Pop singer Miley Cyrus on Wednesday promoted US$1 million worth of stocks being offered by financial payments company Square Inc.’s Cash App. Fans can enter the giveaway — timed for the 15th anniversary of the premiere of her television series Hannah Montana — by commenting on her Twitter or Instagram profiles.

Nothing is more important than investing in yourself. I want to spread ownership to as many people as I can, so I’m teaming up with @CashApp to give out $1 MILLION in stocks. Share your $Cashtag & favorite company name for your chance to own📈#INVESTINYOU #partner #15YearsofMiley pic.twitter.com/mFvkDeNnFV

It’s the latest illustration of how stocks are gaining pop-cultural cachet after long being relegated to the realm of boring financial instruments associated with Wall Street pros. It’s also a reflection of how Silicon Valley firms such as Square — its chief executive is Twitter co-founder Jack Dorsey — and brokerage app operator Robinhood are leveraging the power of social media to draw more customers.

Following her announcement, Cyrus tweeted a link urging her followers to “learn more about stocks.” It’s not the first time Cash App has teamed up with a celebrity — in August, rappers Meghan Thee Stallion and Cardi B gave away US$1 million in cash via the service.

Interest in stocks and markets has exploded over the past year, as people stuck at home during pandemic lockdowns began downloading apps such as Robinhood and trading shares as a distraction from boredom.

They have helped drive record rallies in companies such as billionaire Elon Musk’s Tesla Inc., boosted “meme” stocks such as GameStop Corp. and even lifted cryptocurrencies like Bitcoin to unprecedented heights. It’s also raised concerns among financial advisers who worry that individual investors are risking money they can’t afford to lose.

The companies supporting the boom are undeterred. Just last month, Square said it purchased US$170 million in Bitcoin — a reflection of Dorsey’s belief in cryptocurrencies and the open internet. Robinhood, meanwhile, is preparing to go public even as it faces intense scrutiny from regulators and lawmakers.

People who took up Cyrus’s offer are already seeing free stock pop up in their accounts. Naturally, Tesla was among the most commonly requested.

Jordon Cameron, 28, from Wichita, Kansas, has been using Cash App for more than three years. About five minutes after he commented on Cyrus’s post, he received a notification for US$100 worth of free Tesla stock. Receiving it was “just something brightly positive in the current world of negative toxicity,” he said.

Why did he want Tesla? “Tesla and Elon are on the forefront of batteries and electric vehicles innovation, so I thought go big or go home,” he said. Alex Mendez, 18, also received US$100 worth of Tesla stock, while Madison Bennett, 20, from Boston received US$50 worth of it.

The giveaway will continue until April 13, and recipients are selected at random.