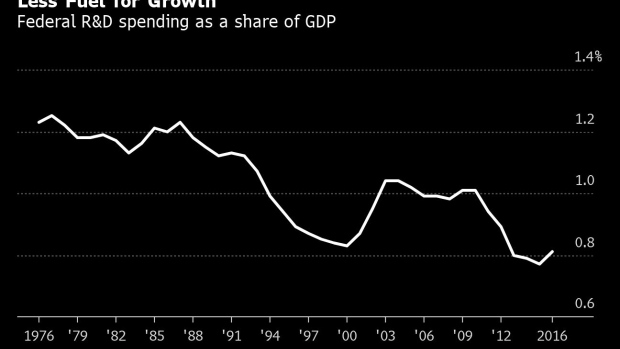 (Bloomberg Opinion) -- There has been a clamor for the U.S. government to spend more on research and development. Economic theories such as those of Paul Romer, who won the Nobel prize in 2018, suggest that spending more on R&D would promote long-term economic growth. A growing number of economists also believe that basic research is a job that only government can do; because basic research is so hard to profit from directly, there’s a clear pipeline from government-funded discoveries to private-sector innovations. The history of postwar U.S. research spending clearly shows this pipeline in action. Key technologies from the internet to smartphones to solar power have depended crucially on government-funded breakthroughs.

But the pipeline is breaking down. Budget cuts have shrunk the government’s role as a driver of research spending:

That may result in a dearth of new breakthroughs in the future. The result could be slower growth and diminished U.S. international economic competitiveness, as well as reduced ability to fight climate change.

A new paper by economists Enrico Moretti, Claudia Steinwender and John Van Reenen confirms the importance of government’s contribution and that more government R&D spending leads to a rise in private-sector research.

The impact of government spending on private spending is hard to measure because both might target the same hot areas of research. Moretti and his colleagues got around this problem by looking at military budget increases in developed countries; these tend to boost all areas of defense spending, including R&D. And because the money tends to be distributed in more or less constant proportions to various industries, the economists were able to isolate the response of the private sector. They found that for every 1% increase in defense research spending in an industry, private research spending went up by about 0.5%.

So government research spending spurs businesses to do more research of their own. Moretti and his colleagues also found that this tends to increase employment within an industry, as well as boosting worker skills and productivity.

So the notion of a government-to-industry research pipeline is very real. That will be heartening news to those on the political left who argue for a greater economic role for government. But they may be less enthusiastic about how much of this role is played by the military.

In many rich countries, defense isn't a big component of research spending. In the U.S., however, it’s more than half:

Furthermore, the military is better-equipped than the private sector and traditional university laboratories for some types of important research. The so-called ARPA model (named for the Defense Advanced Research Projects Agency, or DARPA), which brings together teams of researchers from different fields and institutions to create breakthrough technologies, would be practically unthinkable for companies bent on guarding trade secrets or solitary professors competing for funding grants and prestige. It’s little surprise that most of the modern information-technology industry is based on old DARPA research in some way.

But military spending isn't particularly popular; the public is evenly split on the issue. That’s one reason the U.S. defense budget is close to historic lows as a share of the economy:

Meanwhile, there’s the danger that general military funding will be wasted on boondoggle projects, dished out as pork or used to fund military adventures.

One response would be to spin off DARPA and other Defense Department research into a separate non-military agency with independent funding streams. But this was done with ARPA-E, the energy research arm of DARPA, and the results have not been encouraging. President Donald Trump has repeatedly sought to cut ARPA-E’s already skimpy budget or kill it outright; since the agency isn't part of the Defense Department, conservatives are more likely to go along.

A better idea is to make military funding increases contingent on the Defense Department shifting more spending toward research. This would represent a compromise that supporters and opponents of military funding might be able to agree on. The U.S. military certainly has a large vested interest in developing alternative energy and other technologies that would benefit not just private industry, but all of society and the rest of the world.

Defense research is thus a shining example of a U.S. institution that still functions at an extremely high level and generates broad benefits for the entire country and beyond.