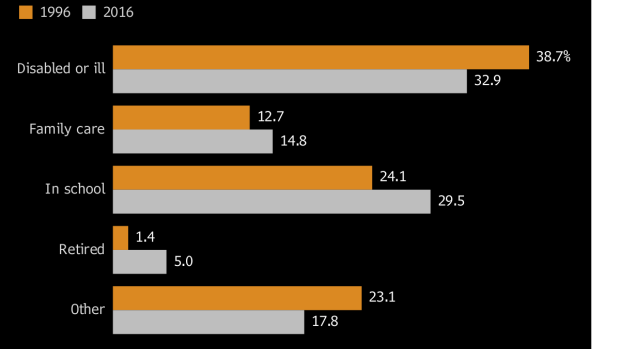 (Bloomberg) -- Nathan Butcher is 25 and, like many men his age, he isn’t working.

Weary of long days earning minimum wage, he quit his job in a pizzeria in June. He wants new employment but won’t take a gig he’ll hate. So for now, the Pittsburgh native and father to young children is living with his mother and training to become an emergency medical technician, hoping to get on the ladder toward a better life.

Ten years after the Great Recession, 25- to 34-year-old men are lagging in the workforce more than any other age and gender demographic. About 500,000 more would be punching the clock today had their employment rate returned to pre-downturn levels. Many, like Butcher, say they’re in training. Others report disability. All are missing out on a hot labor market and crucial years on the job, ones traditionally filled with the promotions and raises that build the foundation for a career.

“At some point, you can have a bit of an effect of a lost generation,” according to David Dorn, an economist at the University of Zurich. “If you get to the point where you’re turning 30, you’ve never held a real job and you don’t have a college education, then it is very hard to recover at that point.”

The young ones have fared particularly badly. Many of them exited high school into a world short on middle-skill job opportunities, only to be broadsided by the worst downturn since the Great Depression. Employment plummeted across the board during the 2007 to 2009 recession, and 25- to 34-year-old men fell far behind their slightly-older counterparts.

Though employment rates have been climbing back from the abyss, young men never caught up again. Millennial males remain less likely to hold down a job than the generation before them, even as women their age work at higher rates.

Their absence from the working world has wider economic consequences. It marks a loss of human talent that dents potential growth. Young people who get a rocky start in the job market face a lasting pay penalty. And economists partly blame the decline in employed, marriageable men for the recent slide in nuptials and increase in out-of-wedlock births. Those trends foster economic insecurity among families, which could worsen outcomes for the next generation.

Butcher has a high-school diploma and a resume filled with low-wage jobs from Target and Walmart to a local grocery store. He’s being selective as he searches for new work because he doesn’t want to grind out unhappy hours for unsatisfying compensation.

“I’m very quick to get frustrated when people refuse to pay me what I’m worth,” he said. His choosiness could be a generational trait, he allows. His mother worked to support her three kids, whether she liked her job or not.

“That was the template for that generation: you were either working and unhappy, or you were a mooch,” he said. “People feel that they have choice nowadays, and they do.”

There is no one explanation for what’s sidelining men -- data suggest overlapping trends -- but Butcher sits at a revealing vantage point. His demographic has seen the single biggest jump in non-participation among prime-age men over the past two decades: About 14 percent of 25- to 34-year-olds with just a high-school degree weren’t in the labor force in 2016, up from 6.4 percent in 1996, according to Federal Reserve Bank of Kansas City analysis by economist Didem Tuzemen.

It’s difficult to pin down whether the demographic wants to remain on the sidelines or is kept there by a dearth of attractive options. They could be choosing to stay home or enroll in school because well paying, non-degree jobs in industries like manufacturing are fewer and further between. But it isn’t clear why lost opportunity would hit young men hardest.

Other social changes could be exacerbating the trend. Better video games might make leisure time more attractive, some economists hypothesize, and opioid use might make many less employable. Young adults increasingly live with their parents, and cohabitation might be providing a “different form of insurance,” said Erik Hurst, an economist at the University of Chicago.

So the question looms: Is the group’s employment decline permanent? Survey data may offer clues.

Young men have been reporting higher rates of school and training as a reason for their non-employment in a Labor Department survey, and a large share say that disability and illness are keeping them from work. Those factors explain much of the wider post-2007 participation gap between 25- to 34-year-olds and their older counterparts, according to an analysis by Evercore ISI economist Ernie Tedeschi.

As for school and training, it’s not obvious that the move toward higher enrollment will reverse -- or that it should.

Butcher, for one, hopes EMT training at The Community College of Allegheny County will be a first step toward a career in health care. He wants to earn enough to provide security for his son and daughter, who live with their mother.

To contact the editors responsible for this story: Brendan Murray at brmurray@bloomberg.net, Randall Woods