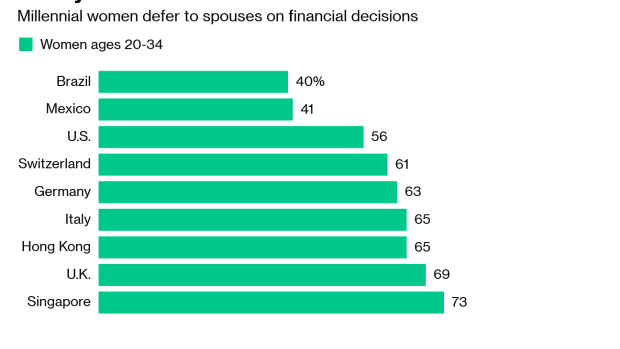 (Bloomberg) -- Marielle Schurig spoke to a group of women at a wellness event at Lululemon Athletica Inc.’s store in New York’s Flatiron district, after they’d sweat it out together in a yoga and circuit-training class. Following her remarks, attendees lined up for an hour to talk to her about their finances.

The women told Schurig, 31, an account vice president at UBS Financial Services Inc., that they let their spouses or partners decide on money matters. Despite investing hours in self-care, many of the self-proclaimed feminists admitted that they had taken a back seat in their own financial affairs.

That’s not uncommon: 59 percent of women age 20 to 34 defer investing and financial planning to spouses, according to a survey by UBS Group AG that was released Wednesday. The Swiss bank found that younger women are more likely than earlier generations to give such leeway to their partners.

“I was really surprised to see that,” Schurig said in an interview at UBS’s office in New York. “You see women fighting for equal rights and equal opportunities, for respect in the workplace and at home. There’s all these women running for political office. We continue talking about breaking glass ceilings. But once we make the money and get those positions, what are we doing with it?”

UBS Global Wealth Management polled 3,652 women globally with a minimum of $250,000 in investable assets. Millennial women cite other responsibilities as being more urgent than investing and financial planning, according to the study. And younger women often don’t include financial health as a factor in their well-being, said Schurig, a regular at SoulCycle.

“Women will spend a lot of time researching the best skin care, makeup product -- they’re not sitting down and examining their financial life,” she said. “It’ll be hard for us to be fully equal with men if we’re not on the same financial page as them.”

The study found that women are overwhelmingly involved in day-to-day money matters, with 80 percent paying bills and 85 percent regularly managing expenses. Yet all around the world, that engagement doesn’t extend to longer-term finances.

“Women tend to take care of the daily bills, the budgets, and not the long-term planning,” Kathleen Entwistle, 53, a private wealth adviser at UBS Financial Services who’s been in the industry for 18 years, said at a presentation in New York. “It feels overwhelming to them. The idea isn’t: Are men or women better? It’s the dynamics of the way we’ve been taught, brought up, and the way we think about these things.”

About 82 percent of women of all ages told UBS that they thought men know more about investing and financial planning. The proportion of younger women deferring financial decisions to their spouses was lowest in Brazil and Mexico, while fewer than 10 percent of women in Switzerland, Hong Kong and Singapore make financial choices together with spouses.

In a separate S&P Global Inc. survey of almost 10,000 Americans, only 26 percent of U.S. women said they make investments even as 41 percent say it’d be a good time to be active in markets.

Wendy Holmes, 47, a private wealth adviser at UBS Financial Services, said she hopes the latest findings will jolt more women into action. One of her clients, a single mother, had a memorable reaction to last year’s survey.

“She said it was a serious wake-up call, and she wanted to be more engaged and to understand how she was investing,” Holmes said.

--With assistance from Venus Feng and Suzanne Woolley.