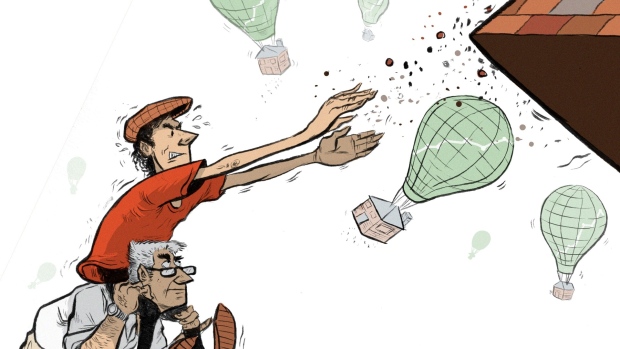 Many parents want to help their kids buy a first home. Is this a good idea, and if so, what’s the best way to do it?

The growing unaffordability of buying a home irks Kedar, 29. He and his wife, both money-conscious millennials, work in the financial services industry and haven’t been able to purchase a house, despite great jobs, a frugal lifestyle and a dedicated savings plan.

Kedar has been searching for five years, waiting and hoping for house prices to come back to more affordable levels, only to see the market rocket higher and higher. He tells horror stories of showing up at home viewings only to be pressured into bidding on a house he has only seen for twenty minutes.

“The feeling we get is that we are never saving enough. If we put aside a dollar of savings, house prices go up two bucks. It’s a game that you are never going to win,” he says.

It used to be that middle-class success in Canada began with a nice starter home in the suburbs with a lawn to cut in the summer and a driveway to shovel in winter. But no more. Today, people in cities are struggling to find a home they can afford that is bigger than a hotel suite or has less than a two-hour commute. The average price for a single detached home in Toronto has reached $1.05 million and $1.40 million in Vancouver. Plus, regulations now require buyers of homes priced at one million dollars to put up a minimum 20% down payment.

Despite the obstacles Kedar faces, he is determined to make it on his own without his parents’ help. Whether or not to ask for help buying a home is a common problem young people are facing. Parents of millennials are opening up their wallets (and hearts) to help their kids get onto the property ladder. But just how should parents help their kids? And what is the best way to do it?

Thirty-year-old Taylor had also been watching the real estate market for years and took the plunge three years ago with help from her parents. Taylor’s Mom and Dad made a deal with her when she was little that they would ‘help out’ with any expenses if she worked hard and received good grades. The deal worked. Taylor was the top of her class through high school and her parents bought her the essentials any kid should have . . . but with strict limits. Soccer gear and fees? Yes. Movies and pizza with friends? Yes. $150 jeans? No.

Taylor worked part-time throughout university, while her parents paid her tuition, and after graduation worked for the next three years at a bank in Toronto. Like many people, she wanted to jump into the housing market before prices got too far out of her range. She put offers out on 20 detached homes but kept losing to higher bids, and found as prices charged ahead, she could only afford smaller and smaller properties. Finally, Taylor found a townhouse on the subway line that had everything she needed plus a great rooftop patio.

But despite saving for the last 13 years, she needed an extra $25,000 on top of her down payment to cover the land transfer tax and legal fees to close the deal.

But lucky for Taylor, the deal with her parents kicked in and her parents picked up the costs. While there was no “official” loan document drawn up, Taylor did send an email to her parents stating the terms of the loan. The trust she and her parents have in each other meant they were comfortable with their ad hoc arrangement.

But not every situation goes as smoothly as Taylor’s case, says Laima Alberings, a tax and estate planner at TD Wealth, who cites situations where an adult child’s creditors lay claim over this money or where a subsequent marriage breakup or death puts the funds at risk. She says she sees many clients who are grappling with the challenges of lending money to their children.

Alberings says there are several different ways to provide money to help your children buy a home depending on your intentions: as a gift, a loan, becoming a guarantor or co-signer to a mortgage, or drawing up a discretionary trust that stipulates the conditions by which a child can live in a home that is owned by the parent. Each has its own benefits and drawbacks depending on your situation.

But Alberings says it is important to be clear with yourself and your child what is the actual intent behind providing the money. For example, if you have transferred funds to a son’s or daughter’s bank account, but eventually mean to discuss the terms of paying back the loan someday, your children may have already regarded this money as a no-strings attached gift.

Watching your children making it on their own is a big source of pride for parents but the harsh realities of the economy are that many young families with good jobs and two incomes can’t afford what their parents and grandparents took for granted. However, Alberings says, before you write that cheque, think about how you can balance a gift or loan to one child with how you treat other children if they find themselves needing money in the future as well. Think about your child’s economic situation: if they can’t afford a down payment, what will happen when they have to renegotiate their mortgage, or if housing prices suddenly drop in value? She says that a loan must fit the economic realities and the personal situation of the child.

“Does every 28-year-old need a detached home?” Alberings asks clients.

Taylor admits that before she bought the home, her spending habits were a bit undisciplined. But her parents were confident that her money “self-control” would improve once she was saddled with home ownership. Now she only takes moderately-priced vacations and brings her own lunch and coffee to work. She watches with amusement while her friends rack up large purchases.

“I say, ‘Wow, that’s the equivalent of a mortgage payment. I’ll pass,’” Taylor says. For her, a simple loan agreement between her and her parents worked. But for others, it may not.

Alberings says parents and their children should consult a financial planner or advisor to consider what is the best way to contribute to your child’s real estate purchase together. A well-thought out arrangement could be the key to achieving your child’s financial goals while protecting your money as well.

Laima Alberings says you should ask yourself these questions before deciding whether to loan your children money: