Millennials' use of technology is driving lithium demand - BNN Bloomberg
{{ currentBoardShortName }}
Markets
As of: {{timeStamp.date}}
{{timeStamp.time}} 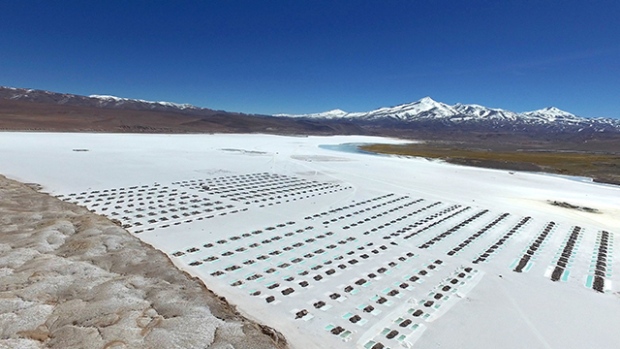 According to Goldman Sachs, “Lithium is the new gasoline”. It is the essential light metal that powers all our hi-tech tools like cell phones, laptops and electric cars. Additionally it is used in grid storage or "powerwalls" that store energy generated by wind turbines and solar cells, allowing energy to be put back into the power grid when consumers need it. This 21st century metal is the key driver of clean, renewable energy storage technology. We can't get enough of it — literally.

Kyle Stevenson, President of Millennial Lithium Corp. (TSX.V: ML), says the world supply of lithium must increase exponentially in order to meet future demand. Fortunately, Millennial Lithium is in a position to help fill the future supply gap predicted my many analysts.

A recent article by The Economist, called the boom The White Gold Rush.

For Stevenson, the White Gold Rush math is pretty simple: the demand for lithium is soaring and so is its price. Demand is being driven by the need to eliminate green house gas-producing internal combustion engines with clean electric vehicle (EV) technology. EVs rely on lithium batteries for power. Lithium prices, are hitting record highs in China, with battery grade lithium jumping to a high of $20,000 per ton in 2017, almost tripling in one year.

Goldman Sachs wrote a report that stated for every one per cent uptake of electric vehicles, you need 70,000 tonnes of lithium carbonate production per year. That's equivalent to three or four good-sized mines, according to Stevenson.

EVs are growing in popularity in North America, but are even more popular in Europe. In Norway, the penetration of electric vehicles is 37 per cent of the market. Stevenson sees countries like Canada following suit sooner than later.

"That's where the industry's going — it's all going electric," he says. "In the near future, if you have a two-car family, one will be electric."

Evidence of that is the demand for the new Tesla Model 3 EV, which is about to go into production. Reasonably priced at about $35,000, Tesla has 400,000 advance orders for this cutting-edge vehicle. But a shortage of lithium for the crucial batteries is putting the brakes on production. Tesla can only produce between 100,000–150,000 vehicles a year due to the lithium shortage.

Couple that with the ever-growing sales of cell phones and other technological products that rely on lithium for their components, and the demand for the new gasoline just keeps going up.

"Right now the lithium industry is at 220,000 tonnes a year of demand, and there's estimates that in 2025 that the demand will be anywhere from 500,000 to a million tonnes a year," says Stevenson.

"It's going to at least double in the next six years, and I don't see enough lithium projects out there to meet that demand."

To help fill the gap, Millennial Lithium has assembled 25,000 hectares of claims in the heart of South America's famed "Lithium Triangle," home to the world’s most prolific lithium mines. These expansive salt flats are found where Bolivia, Argentina and Chile meet, and boast the highest concentrations of lithium brines in the world. Grades in the lithium triangle average 500 per cent higher than in Nevada — little wonder the triangle is home to several world-class lithium mines, which are the most profitable in the industry.

"We're at 4,000 metres in the Andes," says Stevenson, who has been to the region many times. "It's high alpine desert — it's definitely interesting terrain."

The company’s flagship project covers over 6,000 hectares of the Pastos Grandes Salar, 230km from the city of Salta at an elevation of 3,800 metres. Pastos Grandes is an advanced stage project that contains lithium brines ranging from 400 mg/l to 600 mg/l. Pastos Grandes also has some of the best infrastructure in the Lithium Triangle, with good road access, power, water and natural gas.

"We're completing a resource estimate on it right now that should come out sometime in the fall, and shortly after that we'll be doing a Preliminary Economic Assessment," says Stevenson.

"We're three years from production and that's what we're primarily focused on."

Typically, lithium is found in salars, which are salt-encrusted depressions that are usually in the basin of an evaporated lake. To extract the lithium, brine contained within the salar is pumped up into solar evaporation ponds. It's an environmentally friendly, largely solar-powered — and very inexpensive — process. The concept and technology is simple. Finding the right salar is not.

"Fortunately, we've hit lithium from surface right down to depth. We're at about 550 metres, so the entire way we've had lithium values. It is getting higher grade as we go deeper, but on average we're looking over 500 ppm lithium."

Currently, Millennial Lithium has about 30 staff working in Argentina. Stevenson says when the Pastos Grandes mine is built, it will cost about $200–$250 million. That will go into the local economy for service providers, workers and construction contracts. So the people of the region will also enjoy the benefits of the lithium boom.

Argentina's resurgence as a lithium supplier is due in large part to the election of President Mauricio Macri in December 2015. His government has greatly improved the legislative landscape for mining companies and created rapid growth in Argentina’s lithium industry.

"Macri has opened up the country to foreign investment. It's open for business for companies developing mining projects, and you can see it in the local economies," says Stevenson.

"With the influx of mining, the people are happy, so we're hoping to continue on along those lines, because for so long in Argentina, it was difficult to do business there."

Millennial Lithium has a strong technical team lead by Iain Scarr in Argentina. CEO Farhad Abasov (newly added) has over 15 years of experience founding and managing natural resource companies. Most recently he served as President and CEO of Allana Potash Corp., a potash development company that was sold to Israel Chemical Ltd. for $170M in 2015. He was also the Executive Chairman of Rodinia Lithium, a company developing lithium brine assets in Argentina.

Stevenson was raised in Terrace, B.C. and received his Bachelor of Commerce from the University of Victoria. In addition to extensive experience in the mining space, he has over 15 years experience financing public companies.

Soaring prices and soaring demand are key factors driving Millennial Lithium's success. And another cause for optimism is the company's position at the forefront of the mining/energy revolution that's paving the way for a hi-tech, low-carbon future.

"We position ourselves as a tech company a lot of the time," says Stevenson. "We provide the raw materials to make all your tech work: your cell phone, your laptop, all those other devices."

That message resonates with investors.

"Once you start talking about electric cars, they get the concept and they can see where the demand is coming from, and they're receptive," says Stevenson.

The high demand and high price has a lot of investors looking at lithium. But Stevenson says investors should be cautious and do their research.

"We've got real projects, real technical staff and a full operation in Argentina. We're one of the real deals. There are a lot of deals out there that can't say the same."

So with their flagship project Pastos Grandes gearing up for production, and both the price and demand for lithium hitting record highs, it's pretty easy to see why Stevenson is excited about the potential for his company to be one of the big winners in the White Gold Rush.