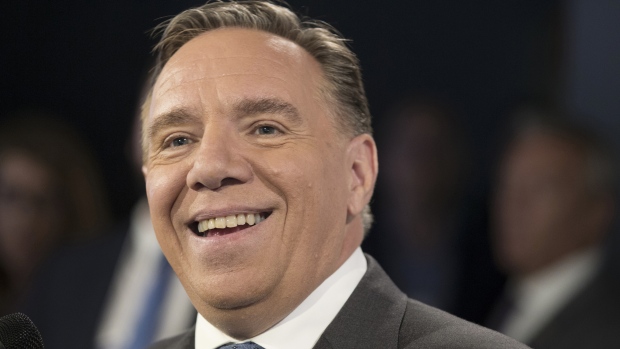 The front-runner to become the next leader of Canada’s second biggest province wants investors to know he will be a good steward of the Quebec economy -- even with a nationalist tinge to his policies.

Francois Legault, the millionaire businessman-turned-politician whose agenda includes commitments to curb immigration and boost disposable income, plans to keep balancing the budget if his Coalition Avenir Quebec wins power Monday. Still, his lead over the governing Liberal Party has evaporated so the CAQ will need to rely on opposition parties to pass laws if it falls short of a majority of seats in the legislature.

Legault, the only leader the six-year-old party has known, is seeking to tap voter desire for change after 15 years of almost uninterrupted rule by the Liberals. Throughout the campaign, the former airline executive has been hammering away at the incumbent party’s record on integrity while pledging to build a richer Quebec with lower taxes, better schools and quicker access to healthcare.

“My message to the markets is that we will be responsible,” Legault said Thursday in a telephone interview. A roster of candidates that includes former senior executives of National Bank of Canada and Quebec’s $308 billion  pension-fund manager “should reassure investors. I am an entrepreneur, a true capitalist.”

Although the CAQ and Premier Philippe Couillard’s Liberals are essentially tied in popular support, the upstart party is still projected to win more seats, according to polling data compiled by the Canadian Broadcasting Corp. The separatist Parti Quebecois, which governed from September 2012 until April 2014, is a distant third.

“Mr. Legault’s political career is on the line,” Guy Lachapelle, a political scientist at Montreal’s Concordia University, said in a telephone interview. “He has to show that he can take advantage of voter fatigue with the Liberals and win an election.”

While the Liberals have won praise from bond investors and ratings agencies, the spending restraint they imposed left many Quebeckers disillusioned by overcrowded hospitals and crumbling public schools. Some voters also want the Liberals replaced after a series of corruption cases linked to the government of former Premier Jean Charest, Lachapelle said.

A chartered accountant who holds an MBA, the 61-year-old Legault boasts a two-decade career in business -- including a stint as president of Montreal-based leisure airline Air Transat, which he co-founded. He made the jump to politics in 1998, serving as education and health minister in a Parti Quebecois government before teaming up with billionaire telecom entrepreneur Charles Sirois to create the CAQ.

Having renounced separatism, Legault now defines himself as an “economic nationalist” committed to boosting power exports, fostering innovation and private investment. He made headlines this month by becoming the first provincial leader to divulge his net worth. He and his wife disclosed assets of about C$9.9 million, including a C$4.6 million house in Montreal’s wealthy Outremont district.

If elected, Legault said he would likely give the provincial government investment agency a bigger role both in attracting foreign capital and intervening to prevent key Quebec-based companies from being acquired.

After crisscrossing Quebec for more than five weeks, Legault said Thursday the voters he’s met during the campaign bring up two main concerns: “their wallet,” and healthcare.

“I continually have people tell me they work hard yet don’t have enough money in their pockets,” Legault said. “That’s why I want to focus on increasing average wages, which means creating better paying jobs, and reducing people’s fiscal burden.”

The CAQ promises to make the state more efficient, targeting savings of about $1.2 billion by 2023 on a total budget of about $124 billion. About 5,000 government jobs -- or 1 percent -- would be eliminated through attrition, and budget items such as procurement would be reviewed to cut costs, according to Eric Girard, a former National Bank treasurer who is running in a district near Montreal.

With the Liberals having announced plans to pay down C$2 billion of debt annually over five years, the CAQ wants to go even faster -- targeting a one-time payment of C$10 billion by the end of March. Such a move could reduce annual interest payments by C$300 million, Girard said.

Legault has assembled a team with strong business credentials. They include Girard; Christian Dube, who left his job as senior vice president of Caisse de Depot et Placement du Quebec to run for the CAQ; and Pierre Fitzgibbon, a former private-equity and biotech executive.

“Mr. Legault has said this election is about changing teams,” said Eric Montpetit, a political science professor at the University of Montreal. “It’s not really about changing programs. If they are elected, you will see continuity on many fronts.”

With Quebec facing labor shortages, the party wants to cut the number of immigrants allowed into the province to 40,000 each year, from 50,000 currently, to better integrate new Quebeckers. It’s also planning to give immigrants three years to learn French and make them take a “values test” -- or face the risk of being expelled.

Legault insists the reduction would be temporary. “When we see good results in terms of integration, then we can start increasing the number again,” he said.

It’s a divisive issue in the mostly French-speaking province of 8.4 million on a continent full of English speakers. Forty-five percent of respondents in a Leger poll this month said Quebec should accept fewer immigrants, while 39 per cent said they want immigration to stay at current levels.

“A number of Francophones are preoccupied by the integration of immigrants,” Montpetit said. “This isn’t a racist position like you see with some of the far-right parties in Europe. Even the CAQ says clearly that Quebec needs immigrants. We just need to integrate them better.”

In the end, Legault’s inability to better explain his position may have cost him a chance at a majority. At a campaign stop two weeks ago, the CAQ leader couldn’t answer a question about the amount of time needed for immigrants to obtain Canadian citizenship -- a stumble that contributed to a drop in support, according to Lachapelle.

“Mr. Legault kind of dropped the ball,” Lachapelle said. “Voters are dissatisfied with the Liberals, but they may not be ready to give Mr. Legault full powers just yet.”