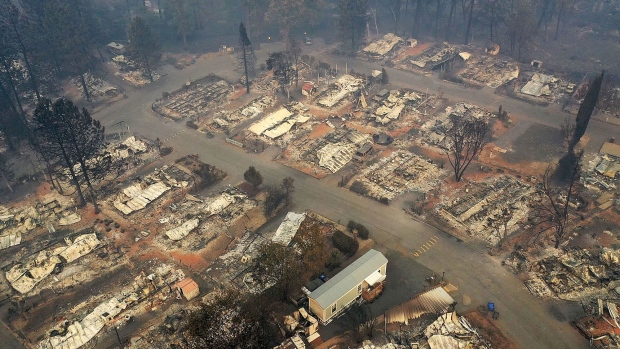 (Bloomberg) -- A California moratorium guaranteeing insurance in wildfire-threatened areas will lapse Saturday, putting 347,000 homes in Pasadena and other Los Angeles foothills communities at the mercy of the market.

As many as 2.4 million homes are at risk of losing protection in 2021 as year-long grace periods expire – though new disasters may extend their shields. In all, 18 percent of the state’s households could effectively lose protection, the largest single group since the moratorium law took effect three years ago.“We're going to pay the bill for climate change one way or the other and it's just a question of how we divvy up that cost,” said David Russell, co-director of the Center for Risk Management and Insurance at California State University, Northridge. “What California politicians are trying to do is tinker with how we do that. They're buying time, hoping they get a break.”

Climate change has been rough on the world’s fifth-biggest economy; California, once synonymous with palm trees and Hollywood glamor, increasingly makes headlines for disastrous droughts and apocalyptic fires. Last year, wildfires torched nearly 4 million acres, and this year over 2 million; the Dixie and Caldor fires, two of the biggest, still aren’t entirely contained.

Fires in 2017 and 2018 alone wiped out more than a quarter-century of underwriting profits for the California insurance market, according to Milliman Inc., a risk assessment company.  As insurers rushed to recalibrate risks, consumers were shocked by cancelled policies and soaring rates.

In 2018, after the Camp Fire destroyed more than 18,000 buildings, lawmakers in Sacramento prevented insurance companies from canceling homeowner policies in or adjacent to wildfire areas for 12 months after the day of an emergency declaration. The idea was to protect consumers after traumatic episodes and to give them time to make their homes more fire resistant. That, ideally, would prevent higher rates or cancellations from ever arriving.

“Even when these moratoriums end, they have given people time to make their homes safer,” California Insurance Commissioner Ricardo Lara, said in a written statement to Bloomberg, an argument he has made on numerous occasions. “I expect insurance companies to take that into account.”

It’s hard to tell whether this is wishful thinking or effective policy. Even before the law was enacted, California’s highly regulated market was seeing insurers quit the state or refuse to write new policies.  In 2019, the last period for which information was available, the state saw an uptick in non-renewals of 31%. Over the same period there was a 36% increase in homeowners using the California FAIR Plan, the state’s bare-bones alternative for those who can’t get insurance in the traditional market.

However, the real effects of the moratorium law won’t be known for a while, thanks to lagging statistics, said Cody Webb, an actuary consultant with Milliman.  Numbers on insurance cancellations in 2020 won’t be released by the commissioner’s office until October. It could take another year to figure out how many of the 2.4 million homes coming out of protection this year go on to lose insurance.

And thanks to ever-increasing fires, still more homes are entering the program: at least 350,000 this year, some for the second time.

Mark Sektnan, vice president for state government relations for the American Property Casualty Insurance Association, says companies are “learning to live with” the moratorium. He said some insurers are coping by “filing serial 6% increases” every year to close the risk gap.

He said homeowners and their communities may also be getting better at protecting against fires, just as regulators hoped.

He pointed to a fire that swept Lake Tahoe this summer. After devastating blazes in 2007, the community had been especially aggressive about forest management.

“The firefighters will tell you that when the fire got to that area, the flames dropped from like 20 feet in the air to like five feet in the air,” Sektnan said. “We can’t prevent wildfires, but we can ensure they are less intense, which increases the ability of properties to survive.”