Twenty-year-old William Lovely used to work at Jason’s Deli in Virginia Beach, delivering catering orders to surrounding businesses. Now, thanks to the coronavirus, he’s struggling to pay his bills.

Laid off in March, he’s gone from regular hours and pay to gigging for UberEats or Instacart, earning up to US$100 on some days but often coming home with almost nothing. While the restaurant is trying to slowly reopen, Lovely reckons the best he can hope for is a part-time position, requiring him to keep his second job if he’s going to meet his expenses.

“My job stopped, but the bills don’t,” he said.

Lovely’s experience goes to the heart of the dilemma facing the world economy as it gradually emerges from the virus-enforced lockdown and unprecedented recession: How many of the millions of lost jobs are gone for good? 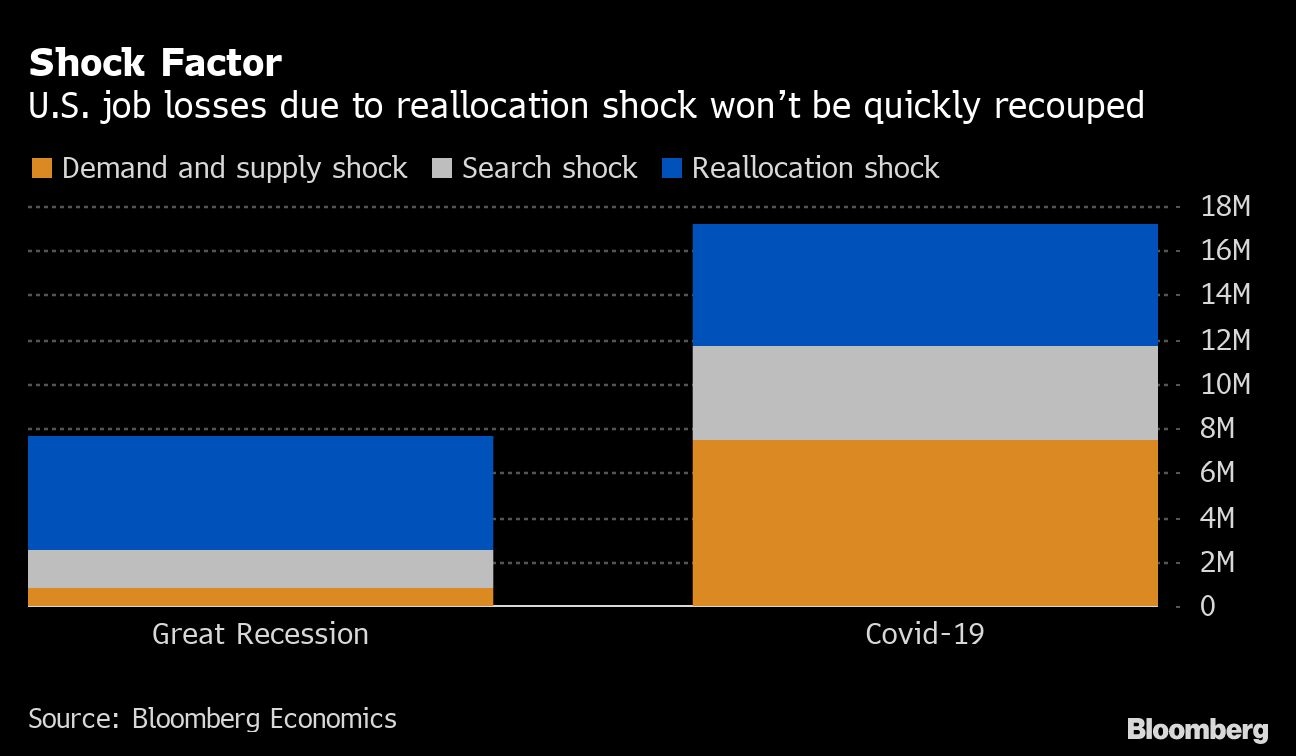 The hope is the waves of stimulus doled out by governments and central banks should eventually buoy economies and spark a revival in hiring. Furloughed or redundant workers would then return to their employers.

The risk though is that the pandemic is inflicting a “reallocation shock” in which firms and even entire sectors suffer lasting damage. Lost jobs don’t come back and unemployment stays elevated. That would force workers to retrain or relocate, both of which are hard, and governments to do more than just try to spend their way out of trouble.

It was a theme hit upon last week by Federal Reserve Chairman Jerome Powell as U.S. central bankers forecast leaving interest rates near zero until 2022 in part because of a surge in unemployment to the highest level since the Great Depression.

There will be “well into the millions of people who don’t get to go back to their old job,” said Powell, who will testify to Congress on the economic outlook this week. “In fact, there may not be a job in that industry for them for some time.”

Unfortunately, new research by Bloomberg Economics reckons 30 per cent of U.S. job losses from February to May are the result of a reallocation shock. The analysis — based on the relationship between hiring, firing, openings and unemployment — suggests the labor market will initially recover swiftly, but then level off with millions still unemployed.

Workers in the hospitality industry — like Lovely’s — are among the most at risk, alongside retail, leisure, education and health. In many cases, the pandemic will increase the challenge for bricks and mortar companies facing off against e-commerce platforms such as Amazon.com. Inc, accelerating the pre-crisis trend. 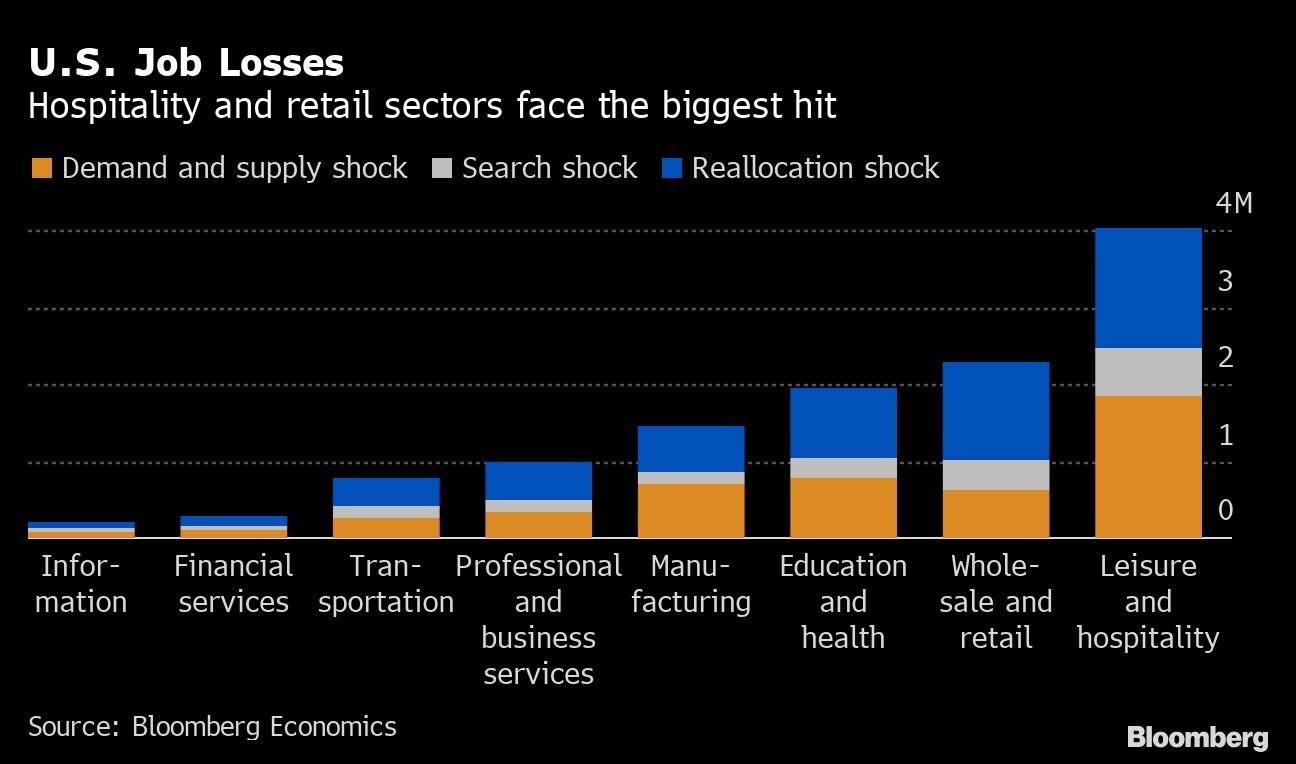 Financial markets are already pricing in the risk, according to the Bloomberg economists. Equity market returns across different sectors and for companies of varying sizes suggests investors are betting on a shift in profits between firms similar to that witnessed after the global financial crisis of 2008. Lost profits spells lost jobs.

Other studies carry similar warnings. Research published in May by the Becker Friedman Institute at the University of Chicago estimated 42 per cent of recent layoffs in the U.S. will be permanent.

“There’s a massive reallocation shock,” said Nicholas Bloom, professor of economics at Stanford University and one of the authors of the study. The recession “hits different sectors differently. Some benefit and some fall.”

The phenomenon puts governments under pressure to craft policies which help viable firms to survive and workers navigate to different jobs, but which ideally don’t prop up companies that are no longer sustainable and just drain resources.

The Peterson Institute for International Economics said in a study last week that the unique shock of the virus means governments may need to do more to preserve businesses and protect workers than they would in a normal recession. 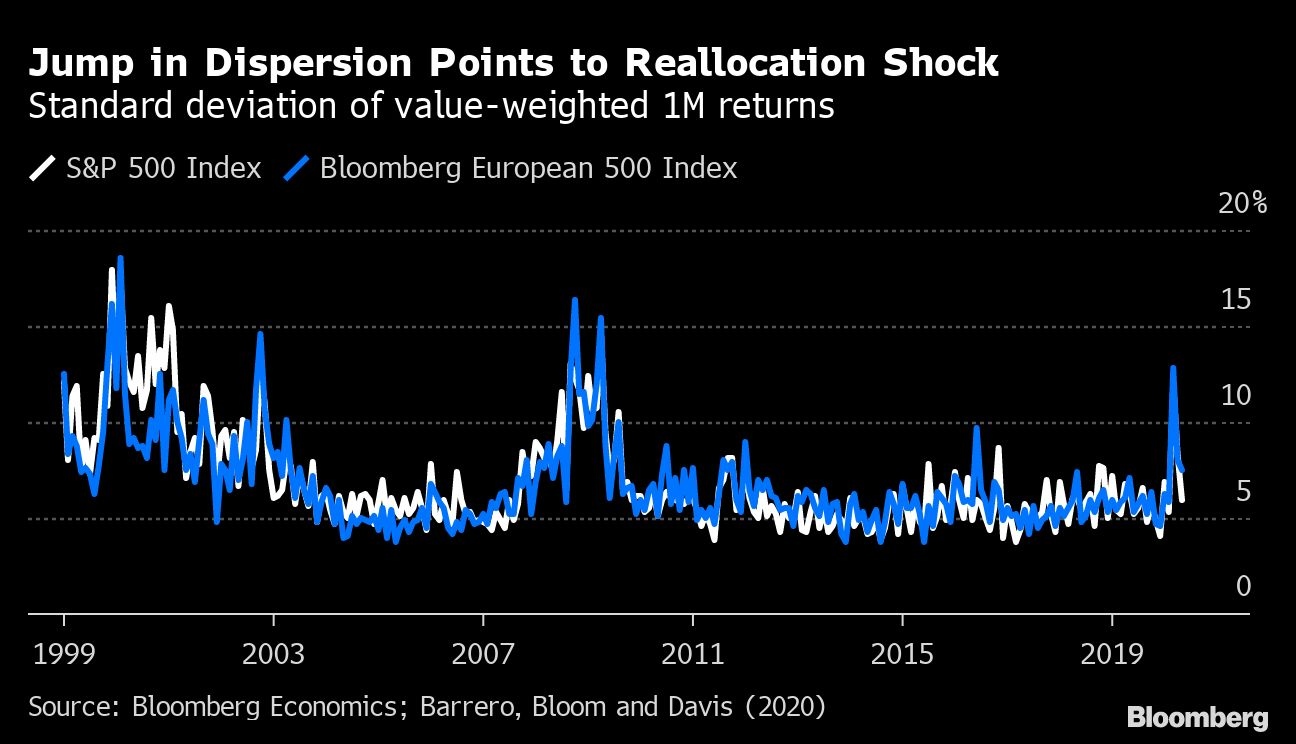 The Bloomberg Economics research highlights the challenge. It found that about 50 per cent of U.S. job losses come from the combination of lockdown and weak demand, 30 per cent from the reallocation shock, and 20 per cent from high unemployment benefits encouraging workers to stay home. Different reasons for job losses call for different, and sometime conflicting, policy responses.

A major worry is that as temporary job losses become permanent, skills are lost and higher unemployment becomes entrenched — a concept economists refer to as hysteresis.

Amid that backdrop, labor market experts says measures shouldn’t stop at improving safety nets, but must also ensure people have the right skills. The Organization for Economic Cooperation and Development last week called for public investment in training for those laid off.

Part of that is about getting workers ready for the next phase of the technology revolution and any upheaval that comes with it.

That process could now accelerate as companies from manufacturers to retailers adapt to a post-virus world, cutting off even more people from secure work.

The potential for structural shifts has also given rise to ideas that might have once seemed non-starters -- from job guarantees to universal income.

In the U.S., an employer-of-last-resort idea won support among some Democrats earlier in the primary election cycle. Economists who’ve worked on versions of the plan, including Darrick Hamilton at the University of Ohio, sought to revive it during the coronavirus slump, citing the example of federal employment programs during the New Deal in the 1930s.

“The pandemic has exposed the fault lines that already existed for working people and the economy,” said Sharan Burrow, General Secretary of the International Trade Union Confederation. “The ‘new normal’ requires a new social contract between governments and their citizens with the backing of the international community.”