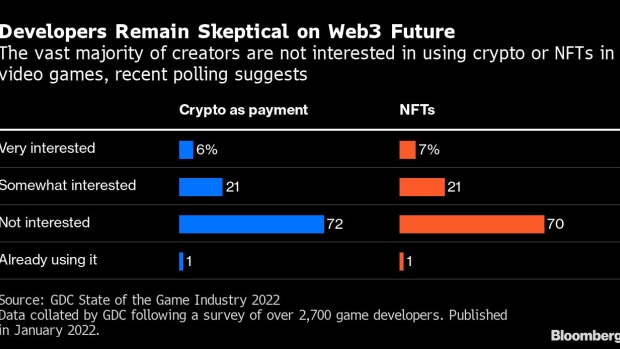 An attendee uses a controller while playing on a Sony Corp. PlayStation 4 (PS4) game console at the Tokyo Game Show 2019 in Chiba, Japan, on Thursday, Sept. 12, 2019. Over 650 companies and groups are exhibiting at the annual game show, which runs through Sept. 15. Photographer: Kiyoshi Ota/Bloomberg , Bloomberg

A fierce divide has emerged between some of the world’s largest video-game publishers and their staff over the adoption of NFTs and blockchain technology. Now, a team of insiders wants to hold the industry’s crypto advocates accountable for introducing any damaging consequences.

Studios including Square Enix Holdings Co., Konami Holdings Corp. and Sega have indicated an openness to adopting nonfungible tokens and blockchain technology in their games, spying a potential for profit in an industry that has typically struggled to make money from the products it creates. Blockchain featured heavily as a topic of discussion at this year’s Game Developers Conference — a top-tier annual gathering for creators — with companies promoting a decentralized future where players can buy a sword in one game, and play with it in another.

But the gulf in opinion between leadership and the employees who actually create the games is vast. Proponents supporting the introduction of digital ownership into games visualize players amassing inventories of tradeable merchandise, or turning their hobby into a side hustle. But many developers say NFTs are an exploitation of gamers’ trust, creating tiered communities in games that benefit the wealthiest players while failing to address the risks of crypto scams and inherent environmental costs. Publishers such as Ubisoft Entertainment SA and Team17 Group Plc were forced to roll back or entirely abandon NFT projects this year after staff showered leadership with hundreds of scathing comments.

Against this backdrop, an independent group of game developers, artists and staff from Minecraft maker Mojang Studios joined forces to draw up a pledge on digital ownership, which calls on studios to commit to being fully informed about the downsides of NFTs and cryptocurrencies before implementing them in games. Signatories must promise not to build games that foster artificial scarcity and speculation, disproportionately benefit early adopters or wealthier players, or use energy-intensive and volatile cryptocurrencies.

“For us as game developers, NFTs change the meaning of what a game is, and that to us is quite worrying,” said Cory Scheviak, a Minecraft game developer who co-authored the pledge with fellow Minecraft concept artist Mariana Salimena. “People can make all of the side arguments they want about giving people jobs and the things they say are positives. But at the end, it’s never really been about players. It’s never really been about helping people. It’s always been about making as much money as possible.”

Published on Tuesday by Scheviak and Salimena’s eco-gaming group Climate Replay alongside a sprawling guide to NFTs and their impact in the games industry, the pledge also reflects input from the climate-focused wing of the International Game Developers Association, academics, and staff from Xbox Game Studios, whose parent Microsoft Corp. acquired Mojang for $2.5 billion in 2014.

A spokesperson for Microsoft’s Xbox, which handles communications for Mojang, said the firm is “aware and looking into NFTs, cryptocurrency and other emerging technologies, but don’t yet have anything to share.”

Among those who promised to sign the pledge prior to its publication are Totally Accurate Battle Simulator publisher Landfall Studios, Scheviak said, as well as a large number of Mojang staff who did not contribute to the guide’s creation. Once live, it will be circulated among developers at most major studios for consideration.

The growth of play-to-earn games like Axie Infinity, which are typically blockchain-based and reward users for playing the game with dedicated crypto tokens, is of particular concern to developers. Paula Angela Escuadra, a games researcher who co-chairs IGDA’s climate-focused group and contributed to Climate Replay’s guide, said the emergence of Axie guilds — where crypto traders hire teams of players to earn tokens on their behalf — highlighted inherent ethical risks with this type of gaming.

“We now have access to over 2.5 billion players, and we have an opportunity to show them a world that could be different,” Escuadra added. “But in reality, play-to-earn and NFTs are perpetuating the harm caused by the financial and economic systems that we already have in the real world. It creates a portrait of a world that is very much still focused on making money.”

Read More Who Hurts Most in $600 Million Axie Crypto Heist? ‘Not the Venture Capitalists’

The $600 million hack that Axie suffered last month represents another risk, too: in taking more of players’ money, gaming companies hold even more responsibility for ensuring the security and relative value of those funds. Since the attack was made public in late March, the value of Axie’s AXS token — and therefore players’ earning potential — has slipped almost 40%.

Outside of gaming, speculation in NFT trading has poorly rewarded investors to date: Data from Nansen in March showed one in three NFT collections on average had expired with little to no trading after creation. Yosuke Matsuda, president of Square Enix which makes the Final Fantasy franchise, told shareholders in January that he expects to see an “eventual right-sizing” in NFT deal activity this year, having already invested heavily in development for blockchain games.

“The games industry has been assaulted for as long as its existed for its ethics. If you go all the way back to Pong, people said we were rotting kids’ brains,” said Grant Shonkwiler, a games consultant and former producer for titles like Fortnite and Doom. “Most of my friends across the industry are like, ‘Why would we want to sacrifice the goodwill that we’ve built with gamers over this, or hurt the planet more?’”