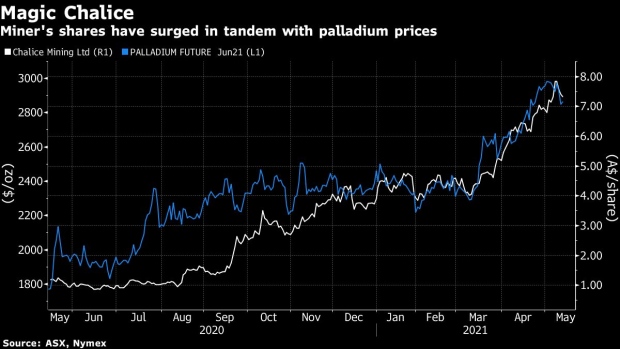 (Bloomberg) -- Sometimes buried treasure can be hiding right under your nose. Just ask Alex Dorsch, whose company found what could be Australia’s first major palladium resource on the fringes of Perth, the nation’s mining hub.

“It’s a fascinating bit of serendipity,” said Dorsch, managing director of Chalice Mining Ltd., which has seen its shares rise more than eightfold since confirming the Julimar discovery just over 12 months ago. “It is quite amazing that it wasn’t found in the 1960s or 70s to be honest,” he said in a phone interview.

Chalice, whose shareholders include mining magnate Robert Friedland and Blackrock Inc., plans to add supply to a palladium market that’s been in deficit for years due to high demand for the metal, used in catalytic converters to curb emissions in gasoline-powered vehicles. Prices surged to record highs this year and UBS Group AG has raised its forecasts on expectations of the largest deficit since 2014.

Julimar -- just 70 kilometers (43 miles) north east of Perth, a city of two million people -- could be big enough to support a large open pit operation producing around 340,000 ounces of palladium a year over a 12-year lifespan, Macquarie Group Ltd. said in a May 5 note. That compares to a market where annual demand runs close to 10 million ounces.

“So far, all the drilling suggests this thing could be significantly bigger than what they’ve already identified,” said Gavin Wendt, founding director and senior resource analyst at Mine Life Pty. The find also contains platinum, copper, nickel and cobalt deposits.

Explaining why the prospect may not have been found earlier, Dorsch, a former McKinsey & Co. consultant, said the industry tended to focus exploration in areas that already were proven to be minerals-rich -- the area around Julimar had no such tradition. The lack of road infrastructure near the prospect had also helped to keep it hidden, because a lot of discoveries start with roadside soil sampling.

“There’s a perception out there that Australia is well explored, but if we can make a discovery within a couple of hours drive of a major capital city then by definition it disproves that perception,” he said. Dorsch was reluctant to put a time frame on when Julimar might be brought into production, but suggests the industry standard of between four and eight years was a reasonable range.

Tighter pollution standards in Europe and China are spurring demand for palladium from automakers, and output is struggling to keep up amid disruptions at Russian mines run by MMC Norilsk Nickel PJSC, the world’s largest producer. While demand for the metal is expected to remain robust as auto production picks up alongside the global economic recovery from the pandemic, the longer-term outlook is clouded by the shift to electric vehicles.

Why Palladium Is Suddenly a More Precious Metal: QuickTake

Dorsch remains confident there will be a strong market for palladium for decades to come, citing growth in hybrid vehicles -- which still need a catalyst for the internal combustion engine. Many countries are still a long way from having the power infrastructure and charging capacity to support a fleet of 100% battery EVs, he added. Meanwhile, palladium and platinum also are key components in the fuel cells that are an essential part of green hydrogen production -- with growth potential as that clean energy technology gains traction.

Julimar’s other minerals were a useful hedge against any emerging softness in the palladium market, Dorsch said. Those metals might take on growing significance as the company continues to explore the resource, he added.

The market is now waiting for a maiden mineral resource estimate for Julimar, expected late in the third quarter of 2021. In the meantime, Chalice - with a market value of A$2.7 billion ($2 billion) -- has been the best performer this year on the S&P/ASX 300 Metals and Mining Index. It’s on the cusp of being admitted to Australia’s benchmark S&P/ASX 200 share index, potentially opening it up to a new cohort of giant index-tracking institutional funds.