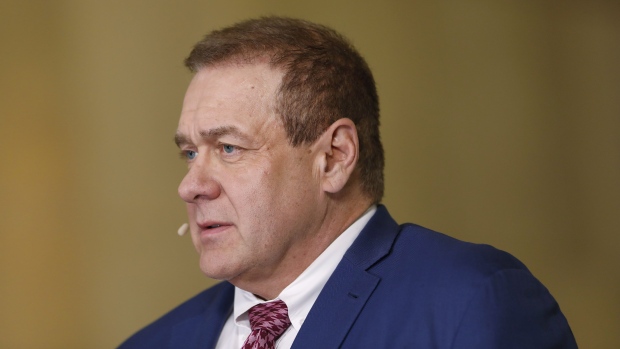 Scott Minerd, chairman of investments and global chief investment officer of Guggenheim Partners LLC, listens during a Bloomberg Television interview at the Milken Institute Global Conference in Beverly Hills, California, U.S., on Tuesday, May 2, 2017. The conference is a unique setting that convenes individuals with the capital, power and influence to move the world forward meet face-to-face with those whose expertise and creativity are reinventing industry, philanthropy and media. Photographer: Patrick T. Fallon/Bloomberg , Bloomberg

(Bloomberg) -- U.S. stocks could tumble 15% or more by the end of October in a challenging period for markets, said Scott Minerd, chairman and chief investment officer of Guggenheim Investments.

“September and October are likely to be very rough this year” for stocks, Minerd said in a Bloomberg Television interview Wednesday. “Maybe a pullback of 15% or slightly more. But once the Dodgers are at the opening game of the World Series, I think you’ll be able to buy.”

A faster-than-expected tapering of asset purchases from the Federal Reserve and the increasing spread of the delta variant are both major risk factors for stocks, Minerd said.

Minerd also expects cryptocurrencies to remain challenged in the coming months. He sees Bitcoin falling further to “something in the neighborhood of $15,000, and said “a lot of this stuff is just junk.”

Bitcoin traded around $31,700 Wednesday, near the lower end of its range over the past two months and down about 50% from the April peak.

“I think there’s still more air to come out,” Minerd said. “The standard bear market for Bitcoin has been an 80% retracement and given all the uncertainty and the new competition from new coins, I think there’s more downside to go.”

“When do you buy it? I don’t think anytime soon,” he added.

Minerd said Bitcoin’s under-performance of late is a bad sign for risk assets and could be the “canary in the coal mine that’s telling us we have more problems ahead for risk assets, and in particular stocks.”

In credit, Minerd said lower-rated high-yield bonds are extremely expensive on a historical basis. For now, he prefers the top tier of junk bonds, and expects better opportunities to buy junk credit in the coming months.

“We are coming into a seasonally difficult time for risk assets, and there might be a better entry point if you want to get involved in high yield credit than where we are today,” Minerd said.

Treasury yields could fall as much as 60 basis points from here if markets enter a risk-off cycle, he added.