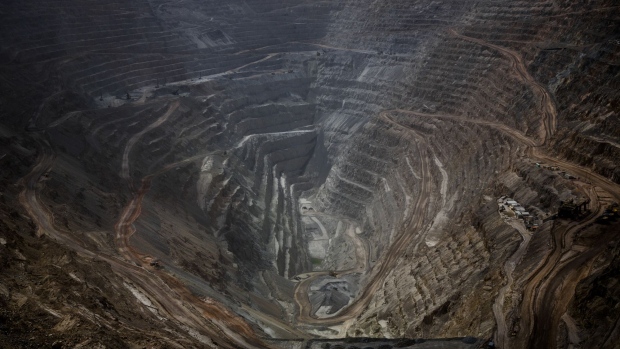 A copper mine near Calama, Chile. Photographer: Cristobal Olivares/Bloomberg , Bloomberg

(Bloomberg) -- The last time the copper industry gathered in Santiago, prices were below $3 a pound amid concerns over a slowdown in Chinese demand, and there was little talk of supply-chain woes or inflation.

Now the executives, bankers and traders drifting in to the Chilean capital for the first in-person version of the Cesco-CRU event in the pandemic era are facing an entirely different set of circumstances.

Sure, mines are raking in the cash with prices now closer to $5. But commodity markets are in a state of flux as Russia’s war in Ukraine exacerbates supply-line frailties exposed by the reopening of economies. For so-called battery metals like copper, an acceleration in electric-vehicle demand adds another layer of tightness as the world tries to wean itself off fossil fuels.

All that should unleash a wave of new investments after a decade and a half of penny pinching triggered by the global financial crisis. But societies have grown much more demanding and costs are surging, making new mines trickier and pricier to build.

Chile’s a prime example. Its vast deposits and decades of regulatory stability made it the dominant supplier. Now major investments are on hold after street protests that erupted in 2019 gave rise to a constitutional rewrite and a new government intent on raising taxes to address inequalities. The writers of the new charter are weighing radical proposals including redesigning private property rights and even nationalizing mines.

“Compared with April 2019, we are in another world,” said Alejandra Wood, executive director of Cesco, the copper research center behind this week’s seminars and social events. “There’s a great need to clear up all the uncertainty facing an industry that’s so essential for the energy transition.”

Mining’s response to the prospect of much more onerous rules in Chile is a campaign to present itself as part of the solution to the planet’s environmental and social woes rather than the problem.

After all, copper is used in everything from wiring and pipes to batteries and motors, making it a key ingredient in the push toward renewable power and electric vehicles. If producers fail to address a looming deficit, prices will keep rising and present a challenge to world leaders counting on a global energy transition to fight climate change.

A similar battle is taking place in other mineral-rich nations like Peru and Serbia as populations fight projects seen as either too dirty or not offering enough economic benefit. In the U.S., efforts to source so-called critical minerals locally are being met with community resistance.

The industry’s ability to secure social licenses needed to ramp up supply will depend on how effectively it switches to clean energy, engages communities and highlights its contribution to state coffers.

Besides the typical market-focused seminars, Cesco Week -- which includes CRU’s World Copper Conference -- will dedicate plenty of discussion time to sustainability issues such as technological developments for limiting emissions.

While Chile risks losing investment dollars to countries that boast richer deposits such as the Democratic Republic of the Congo, there’s still plenty of interest to get back to in-person attendance at Santiago copper week.

Cesco expects 2,000 to 2,500 participants, including a fully-booked dinner of 1,000 guests. That’s about a third of pre-pandemic levels as lingering restrictions limit the number of visitors, particularly from Asia.

Still, the industry is keen “to see faces again,” while high prices have boosted the presence of smaller companies looking to develop projects at an event that’s typically dominated by majors, said Wood.