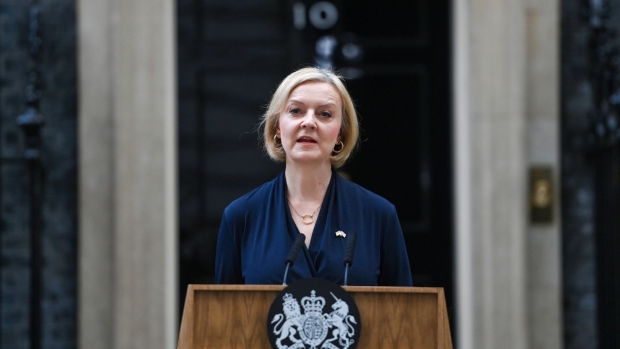 Liz Truss, UK prime minister, delivers her resignation statement outside 10 Downing Street in London, UK, on Thursday, Oct. 20, 2022. Truss quit as UK prime minister after a brief and chaotic tenure that saw her announce a massive package of tax cuts before unwinding most of it in the face of a market rout. , Bloomberg

(Bloomberg) -- The UK economy has still not recovered from September’s mini-budget that triggered chaos in the gilts market, a prominent business group said as it warned of a damaging recession lasting for most of next year.

The British Chambers of Commerce said the promise of sweeping tax cuts made by Liz Truss’s government, which led to a sharp drop in the pound, “is expected to have had a long-term impact on borrowing costs for both businesses and consumers.”

Truss lasted only seven weeks as prime minister and her successor, Rishi Sunak, has tried to shore up confidence by keeping a tight rein on the public finances. However, this has led to higher taxes, which the BCC said are causing further damage to business confidence.

“It is now clear that the September mini-budget and Autumn Statement have had a further chilling effect,” said Alex Veitch, the BCC’s director of policy. “Very few firms will be willing to invest as they face into a wall of higher prices, interest rates and taxes.”

It comes a week after the Confederation of British Industry, another lobby group, warned that the UK faces a lost decade of growth unless the government takes urgent measures to incentivize businesses to invest. A “lack of reasons to believe” in Britain are holding back spending, according to the CBI.

The BCC said investment, already below pre-pandemic levels, will drop another 3% next year amid the malaise. It expects the UK’s output to sink by 0.9% this quarter and continue to fall in the first three quarters of 2023.

Meaningful growth will return only in 2024, the group’s economists said. Inflation has likely peaked at 11% and will drop to 5% by this point next year, they added.

--With assistance from Reed Landberg.

(Adds context on investment and the CBI in fifth paragraph.)