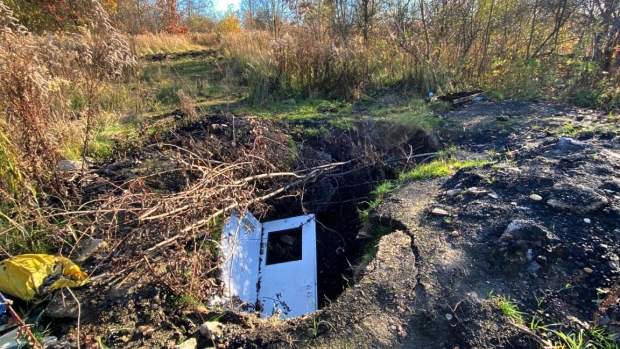 (Bloomberg) -- Polish taxi driver Grzegorz says his phone won’t stop ringing, such is the demand for his services. Yet it’s not a ride people want.

Grzegorz has given up driving for a far more lucrative line of work as Poland grapples with energy shortages: illegal mining. Around his home in the Lower Silesian city of Walbrzych, coal sits as little as a meter below the surface in fields, recreation areas and even gardens. A four-man team can unearth a ton in an hour and make 1,000 zloty ($220) each for half a day’s work, roughly 60% of what an average person earns in a week.

“My wife is against it and worried about me, but as a taxi driver I wouldn’t be able to make this kind of money,” Grzegorz said as he hoisted a bucket of the black gold from a square hole on the edge of a residential area while two of his cohort chipped away with pickaxes.

Across the world, the dirtiest of fuels is going through a revival as Russia withholds gas supplies needed to generate electricity because of the war in Ukraine. That clamor is even more acute in Poland because a disproportionate number of households still depend on coal for heating and there’s a shortage the government is struggling to address.

Vladimir Putin’s invasion of his neighbor has reshaped the energy market, with European Union sanctions on Russia shutting down coal imports to Poland, where it’s used to heat 37% of homes. The nation of 38 million accounts for 77% of all households using coal for heating in the 27-member bloc.

With coal reserves being used up and temperatures plunging, the government in Warsaw is securing coal and relying on municipalities to distribute it. But some coal storage facilities have had to shop from supermarkets after suppliers ran out of stock in the immediate aftermath of the war, undermining President Andrzej Duda’s assurance that Poland has enough coal to last for 200 years.

So people are taking action. Some have turned to burning garbage, worsening air quality in a country where three of its main cities — Warsaw, Krakow and Wroclaw — were in the top 10 for pollution globally at one point this month.

In Walbrzych, it’s sent people driving across the border to buy coal in the Czech Republic — or to pick up shovels and dig. Mayor Roman Szelemej blamed the government for creating a national dependence on the fuel. “This crisis is showing that this was a mistake,” he said at his office.

With a population of about 100,000, the Walbrzych area’s economy relied on coal extraction for two centuries before the last (legal) pit closed in 2000.

The industry’s legacy looms large after thousands of miners were pushed out of work. Indeed, illegal mining isn’t new, it’s more a case of making a comeback. Unemployment is 12% in surrounding towns and villages, about three times the rate of the city itself, so an opportunity to make money can be tempting for those with the residual knowhow.

So-called “poor man’s pits” have sprouted up in forests, fields and shrubland. On the outskirts of the city, a cluster of small private gardens is also dotted with them. One resident said some people need the money and others the coal. The city, meanwhile, is sending patrols to check on the places they know are popular with miners.

“There are more pits in the locations we used to monitor throughout the last years over sporadic cases of illegal mining,” said Mateusz Majchrzyk, spokesperson for the Forestry Management in Walbrzych. “We noticed an increased activity around the mines, and we are also spending more money on the sand we use to fill in the holes.”

Grzegorz, who declined to give his last name or age given his involvement in an illicit trade, said he may be taking the opportunity to make good money, but he’s also helping resolve Poland’s gravest energy crisis in decades.

His group was supervised by Bartosz, who had three years’ experience working as a miner. The pit they were working on was around 3 meters deep, with two men in charge of digging accessing the hole using a hand-made wooden ladder. Grzegorz was filling the sacks with the coal to be carried to a car hidden behind the trees.

“We will dig here as long as we will be able to extract coal,” said Grzegorz. “And then we will dig a new pit.”

--With assistance from Piotr Skolimowski.