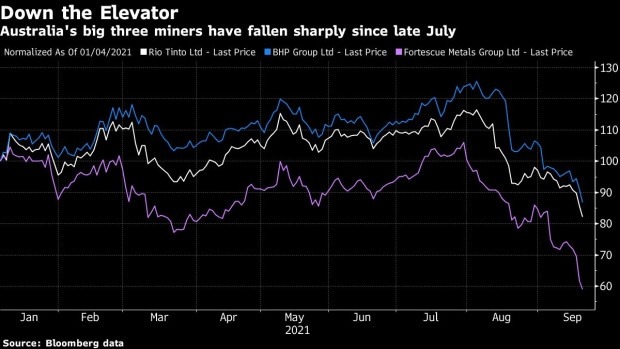 It’s a dramatic reversal of fortunes for Rio Tinto Group, BHP Group and Fortescue Metals Group Ltd., which only last month were showering record dividends on shareholders after prices of the steel-making ingredient surged to an all-time high above $230 a ton in May. They’ve since plunged to near $90 as China stepped up curbs on steel production to meet environmental goals.

Rio Tinto, the world’s biggest ore producer, has retreated 29% from July 29, BHP is down 30% and Fortescue has plunged 44%. That adds up to value destruction of A$150 billion ($109 billion), Bloomberg calculations show. The three miners together account for more than 8% of Australia’s benchmark S&P/ASX 200 share index, which has slipped 2% over the period.

There could be more weakness -- both in iron ore and the miners’ shares -- to come as Beijing doubles down on efforts to cut pollution before it hosts the Winter Olympics next February. The price rout has seen analysts scurrying to their spreadsheets to downgrade earnings forecasts for the big miners. Morgans Financial Ltd. slashed its share price target for Fortescue by more than a quarter to A$14.15 late last week and also trimmed targets for BHP and Rio.

“Despite trading back at lower levels, we remain cautious on our big miners, expecting more short-term weakness in iron ore to unfold,” Adrian Prendergast, resources analyst at Morgans, said in a note. BHP and Rio are “trading around accumulate territory, but again we remain cautious given the poor state of their largest exposure,” he said.