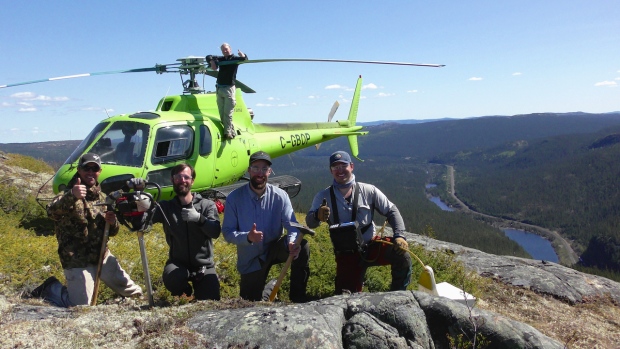 Murchison Minerals Ltd. aims to make the most of shareholders’ value through the discovery, exploration and development of economically viable energy metals projects.

The world is in a mad scramble to secure the critical minerals needed to power the transition to clean energy solutions.

The rise of EVs and other green energy technologies are putting a premium on the metals needed to support this shift. Nickel. Copper. Cobalt. Lithium. Graphite. All these metals have seen their demand soar in the face of rising demand from the Green Revolution.

And with a world-class mineral endowment, Canada is in ideal position to help meet the demand for critical minerals. Recognizing that fact, Ottawa recently committed $3.8 billion to boost domestic production of critical minerals. Additionally, the Province of Quebec plans to become a leading player in the critical minerals mining sector by promoting the development of exploration and mining projects.

The expenditure will help miners get projects through the development curve from exploration and into operation. The investment jibes with Canada’s reputation as a mining-friendly jurisdiction.

Murchison Minerals Ltd. (TSXV: MUR | OTCQB: MURMF), owner of a key nickel-copper-cobalt project in Quebec, sees the investment as in line with Canada’s and Quebec’s commitment to the industry. CEO Troy Boisjoli notes: “Canada is one of the best jurisdictions to explore for, advance and develop a mine.”

A flagship nickel-copper-cobalt project in Quebec

If Canada is one of the best countries to build a mine, Quebec is one of the best provinces in Canada to do so. Again, Boisjoli comments: “Quebec is a province that was first out of the gate in developing and now implementing a critical minerals strategy.”

With EVs increasing the demand for nickel, copper and cobalt alike, the HPM project appears to have significant amounts of those metals. More exploration and development could put it in a great position to become a significant contributor to the rise of green energy technologies.

HPM spans 648 square kilometres and lies near all major pieces of infrastructure to build a mine. It sits along a heavy rail line that goes right down to the St. Lawrence River, providing access to two deepwater ports. There are all-season, all-weather roads within kilometres of the project and a hydroelectric facility nearby.

“Road. Rail. Power. They’re all there within kilometres of HPM,” says Boisjoli. To these advantages Murchison can add significant exploration potential.

The company has already identified a zone of high-grade nickel-copper-cobalt on HPM’s Barre de Fer (BDF) target and has outline numerous nickel-bearing showings on the property as a whole.

In HPM, Murchison believes it is on the trail of an emerging nickel-sulphide district.

Certainly, the company’s 2022 exploration program at HPM has given it a lot of encouragement.

The program consisted of three prongs. First, Murchison flew an airborne geophysical survey to identify electromagnetic conductive minerals assemblages on the property. Next, it followed up on those electromagnetic anomalies on the ground with a series of ground-truthing techniques to identify prospective drill targets. Finally, Murchison drilled 4,300 metres with 3,355 metres at BDF to confirm and expand the mineralization on this advanced-stage target.

Murchison recently released assays from drillhole BDF22-001, the first drill hole completed during the summer exploration program. Assays include 18.05 metres grading 1.86 per cent nickel-equivalent (1.44 per cent nickel, 0.44 per cent copper, and 0.1 per cent cobalt) over 18 metres starting at 89.95 metres depth.

The assay results from the second drillhole, BDF22-002, have turned out to be even more of a highlight. Beginning at 123.8 metres, the drillhole intersected 121.2 metres of nickel-bearing sulphide at an average grade of 1.36 per cent nickel-equivalent (1.02 per cent nickel, 0.56 per cent copper, and 0.07 per cent cobalt). This confirms that BDF22-002 is one of the top nickel-sulphide intersections made at pre-resource project globally over the last several years.

Over the course of its 2022 summer exploration program, Murchison has grown the BDF zone to 370 metres in strike length, 475 metres in depth and a width of 200 metres with individual sulphide lens up to 48 metres wide. Assay results are still pending for the remaining 8 drillholes at BDF, and the company is planning to release a maiden resource on the zone in Q1 of 2023.

Additionally, during the summer exploration program, Murchison drilled 3 holes at the adjacent Syrah target – which lies approximately 350 metres along strike to the northeast of BDF – for which assays are still pending. Furthermore, the company’s summer prospecting program identified numerous new showings of nickel-bearing sulphide mineralization outcropping and subcropping at surface. These new showings add to the significant portfolio of de-risked future drill targets on the HPM project. Lastly, the property wide aerial geophysical survey completed in August of this year identified over 75 EM anomalies that will be ranked and prioritized for future prospecting.

All of these developments and discoveries demonstrates the significance of the BDF zone and overall potential of the HPM project – one of the few emerging nickel-sulphide districts globally.

Regarding the assays from hole 2, Boisjoli comments, “by any metric, that is a significant intersection of mineralization.”

Perfectly positioned for the transition to clean energy

These series of major findings at Murchison's flagship HPM project suggest that the company has only scratched the surface of its exploration potential. At a time when worldwide nickel demand is slated to increase, the opportunities for the company are endless.

Nickel sulphide deposits are critical the green energy revolution because they are the major source of Class I nickel, which is needed for battery-grade nickel.

The problem with nickel sulphide deposits is that they are relatively rare compared to the laterite deposits that provide the bulk of the worlds nickel. Moving forward, the IEA is predicting a 600 per cent increase in the demand for Class I nickel.

And, as Boisjoli notes, “there’s simply not enough nickel projects out there to meet demand.” That is true in all three phases of mining: exploration, development and operations. It’s a situation that puts Murchison Minerals in a great position to capitalize on the world’s need for Class I nickel.

Between its infrastructure and jurisdictional advantages and its district-scale potential, HPM looks like an ideal project for the current market environment. With a scarcity of nickel-sulphide projects to support the global supply chain, HPM and Murchison will likely be getting a close look from investors looking to capitalize.

Production rates of key minerals like nickel, copper and cobalt are likely to be inadequate to satisfy the future demand for these minerals. Murchison Minerals is working to close the gap.

While at the moment BMK is secondary to Murchison’s strategy at HPM, it remains a significant project in its own right and one that lies within one of the world’s great mining jurisdictions.

Looking ahead, the focus for Murchison will be getting the remaining assays back from its drilling at HPM and then putting that data into a resource evaluation. Murchison can move into the resource evaluation stage for BDF because 5,600 metres of drilling was previously done, but never modelled, on the target.

Boisjoli hopes to have a resource estimate out for BDF by the first quarter of 2023 and then to “use that as a platform to leverage significant exploration in the spring and summer of 2023 at HPM.”

That exploration work will include de-risking exploration targets to build out HPM’s district-scale potential.

In a world that desperately needs new sources of Class I nickel, Murchison Minerals appears ready to help fill that demand and make its investors happy in the process.

To learn more about how Murchison Minerals Ltd. is meeting the rapidly expanding demand for energy metals, click here.

To keep up with the company’s latest updates, follow Murchison Minerals on social media: