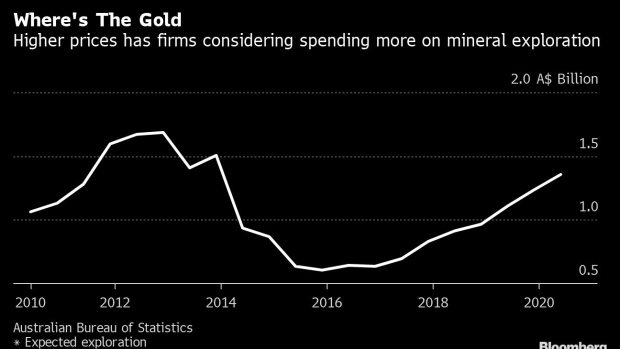 Australia’s resource industry is set to aid the economic recovery once again as higher prices and expansion plans assist the nation emerging from its coronavirus lockdown.

The government’s most recent budget numbers from December were based on iron ore falling to $55 a ton, excluding freight, by the June quarter of 2020. The government gains around A$3.7 billion for every $10 in excess of this estimate in the year to June 2021, which will assist the budget position following the massive fiscal injection.

In 2009, Australia dodged recession and rocketed into recovery as China dropped more than $500 billion of stimulus into its own economy spurring a mining investment boom Down Under. China’s stimulus package is much smaller this time -- and Australia is already in recession -- but the path ahead could prove similar.

While, the Australia-China relationship is in stormy waters following Prime Minister Scott Morrison’s calls for an independent probe into the origins of the coronavirus, key bulk commodities have been insulated from the spat because of the dearth of high-quality suppliers elsewhere.

China has fired warning shots at Australia with tariffs on barley and the suspension of shipments from some abattoirs. Tensions escalated Friday when China’s Ministry of Culture and Tourism published a statement on its website saying that Chinese tourists to be on alert for their safety and not travel to Australia.

Andrew Ticehurst, a rates strategist at Nomura Holdings Inc., is worried that the tensions could limit the upside.

“Iron ore is a genuine bright-spot for Australia,” he said. “However, given the deterioration in Australia-China trade relationship, China may not wish to be seen as ‘rewarding’ Australia too much, and higher iron ore imports could be offset by reduced imports of other commodities, goods and services.”

Rio Tinto Group, the world’s No. 2 miner, in November lifted planned spending on new iron ore mines in Australia to $4 billion, while BHP Group and Fortescue Metals Group Ltd. are both investing more than $3 billion apiece in their own developments. The mines are largely aimed at replacing retiring facilities to sustain exports, though will offer options to boost shipments.

Coal and gold producers are also spending money on new projects in Australia and exploration budgets are rising. Australian gold miners -- on track to become the top producer -- are resuming a pandemic-disrupted exploration spree amid surging prices.

“After declining for several years, mining capex is poised to lift over 2H 2020 and beyond. The precursors for a pickup in investment, such as higher prices and elevated levels of exploration expenditure, remain in place, and could see investment lift beyond replacement levels over coming years.”

“It won’t be as strong as 2009 when there was a pipeline of projects, but it’s a positive when you put together mining investment, the terms of trade and our exposure to China,” said Shane Oliver, chief economist at AMP Capital Investors Ltd. in Sydney.