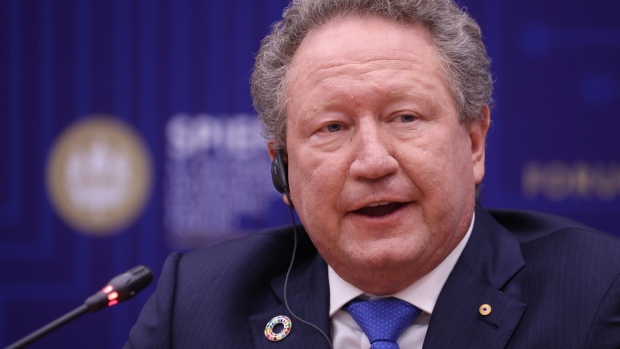 Forrest’s Wyloo Metals Pty Ltd. offered to buy Noront Resources Ltd. for $0.70 per share in cash, beating the $0.55 per share offer made by BHP in July that Noront’s board agreed to support. Wyloo’s proposal had a higher certainty of success because it already owns about 37.5 per cent of Noront’s shares and does not intend to support BHP’s offer, Wyloo said in a statement.

Global miners are keen to boost their exposure to nickel -- a key ingredient in the lithium-ion batteries used in electric vehicles and to store renewable power -- and the Ring of Fire region in northern Ontario is seen among Canada’s largest untapped reserves of the metal.

“If shareholders share my view, that it’s impossible to place a value today on a new mining district with the immense potential of these assets, I invite them to hold on to their shares and come along for the ride,” Forrest said in the statement. Under Wyloo’s proposal, Forrest would become chairman of Noront.

BHP said it would wait for a response from the Noront board before determining its next steps.

“It’s important to note that Wyloo has only made a proposal, which is subject to conditions, and has not entered into any binding agreement with Noront in respect of a transaction or a formal offer,” a spokesman for BHP said by email. “The BHP offer is the only offer that has been made to shareholders.”

Noront continues to support BHP’s offer and called Wyloo’s approach “a non-binding proposal” that is “not an offer,” according to a Tuesday statement by the company.

“Wyloo has not entered into any binding agreement with Noront in respect of a proposed transaction, nor has it made a formal offer to the company’s shareholders,” Noront said in the statement. “There can be no assurance that a transaction will crystallize from the Wyloo proposal.”

Noront’s shares jumped 25 per cent on Monday following news of Wyloo’s offer to end at $0.76, a premium to Wyloo’s offer which suggests the market sees potential for the bidding war to escalate further.