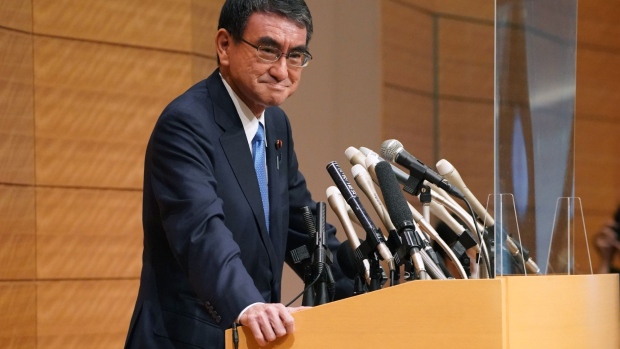 (Bloomberg) -- A senior Japanese official blasted the country’s trade ministry bureaucrats for risking being left behind by “everyone else on this planet” in moving toward renewable energy.

Taro Kono, an outspoken Japanese politician who finished second in the race to be the country’s prime minister two months ago, said “eggheads” in the trade ministry aren’t able to see that other nations are racing ahead in renewables, and that they’re holding Japan back from its carbon neutral goals.

“There are some people in METI who are not comfortable with the idea of an increase in renewable energy,” he said, using the abbreviation for the Ministry of Economy, Trade and Industry which oversees energy policy. “Like it or not, you need to move on to renewables as soon as possible.”

The popular Kono, who was the public pick in opinion polls to replace Yoshihide Suga as prime minister, raised his profile even further this year by heading the country’s successful vaccine rollout. He was then defeated in the ruling Liberal Democratic Party leadership election in September by Fumio Kishida, and relegated to party public relations chief. The U.S.-educated Kono spoke in English at the Foreign Correspondents’ Club of Japan.

Resource-poor Japan has been struggling with surging oil and liquefied natural gas prices and energy security, at the same time pledging to go carbon neutral by 2050. The country is seeking to cut greenhouse emissions by 46% from 2013 levels by 2030.

Government officials, concerned about the long-term supply of traditional fuels as the world shifts toward renewable energy, have been encouraging trading companies, refiners and utilities to slow the move away from fossil fuels, people within the Japanese government and industry have said.

The cabinet approved the country’s energy mix plan in October, which included a more ambitious renewables target for fiscal 2030. Kono was reported to have spearheaded the green energy push, and butted heads with METI officials over those numbers, a public example of the clashes common between elected politicians and the career bureaucrats who wield much of the power.

“Now we are talking about increase in renewable energy, but we don’t have a proper industry in Japan,” he said.

And while renewable energy was given “highest priority” in the newest energy mix plan, the country still needs to get rid of all types of fossil fuel, including natural gas, according to Kono.

“As crude oil cost goes up, if we rely on fossil fuels our industry will lose competitiveness,” he said.