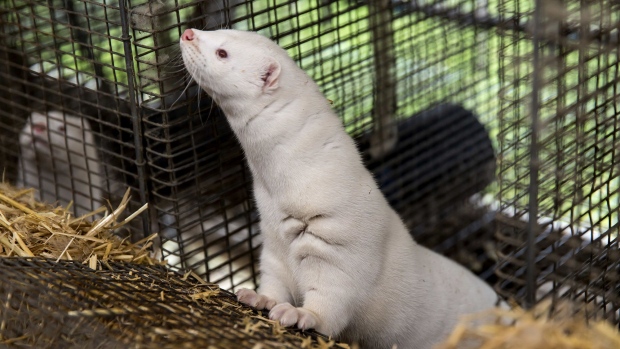 BORDING, DENMARK NOVEMBER 07: A mink at farmer Stig Sørensen's estate where all minks must be culled due to a government order on November 7, 2020 in Bording, Denmark. Like many other owners of mink farms, Stig Sørensen has been forced to cull all his 34.000 minks due to a government decision made on Wednesday. Sørensen says that he is sad but also angry because he feels that the government has made an unjustified and unfair decision. His farm is situated so only part of it is within the 7.5 KM zone from an infected farm and none of his mink have tested positive for the coronavirus. Even so, they are regarded as infected and must all be culled. He also feels that he and his colleagues have been let down by the Danish Government, both in terms of handling the culling and slow information about how they will be compensated. He and most in the industry are demanding compensation according to the rules of expropriation, but Sørensen says that so far the government has talked about compensation per culled mink to a price per skin based on farmers’ average price in 2017 and 2018, which was an all-time low. Denmark, the world's largest mink fur producer, is to mass cull some 16 -17 million minks after mutated forms of coronavirus spread to humans. Some 215 mink farms in Jutland region are infected with this type of coronavirus, and therefore a regional lockdown has been announced to curb the infection. (Photo by Ole Jensen/Getty Images) Photographer: Ole Jensen/Getty Images Europe , Photographer: Ole Jensen/Getty Images Europe

(Bloomberg) -- Keen to avoid the total annihilation of farmed minks as seen in Denmark during the pandemic, the Finnish fur industry is organizing an inoculation program for the animals.

The Nordic nation has about half a million doses of a domestically developed vaccine ready to be deployed this winter, enough to protect the entire population of breeding minks from Covid-19. It’s the first such program in the European Union.

Minks are known to be particularly susceptible to the virus. Denmark last year culled 17 million furry animals after concerns emerged that a mutated form of the virus was spreading through its farms, and there’s evidence from the Netherlands the virus can jump between humans and mink.

In Finland, farms operate under strict lockdowns and close surveillance. No infections have so far been confirmed in the country’s minks throughout the pandemic.

Marja Tiura, managing director of the Finnish Fur Breeders’ Association, said the vaccinations are carried out “to ensure the welfare of animals as well as to safeguard human health” and avoid the emergence of virus reservoirs. Interest in the vaccine has been “massive,” she said in an interview on Monday, though the substance developed jointly with the University of Helsinki only has a conditional usage permit since late September.