Hudson’s Bay said in a statement late Friday it agreed to a new bid by Baker and a group of allies, who together control the company. The offer was increased for a second time to $11 a share from $10.30. Baker’s first offer was for $9.45 apiece in June.

The new take-private bid values the owner of Saks Fifth Avenue at about $2 billion. Catalyst, a Toronto-based private equity firm that had waged a campaign against the agreement and convinced the regulator to delay the vote, agreed to support the new deal.

The raised offer “delivers significantly more value for all minority shareholders, well above the original proposal,” said Gabriel de Alba, managing director and partner of Catalyst, in a separate statement. 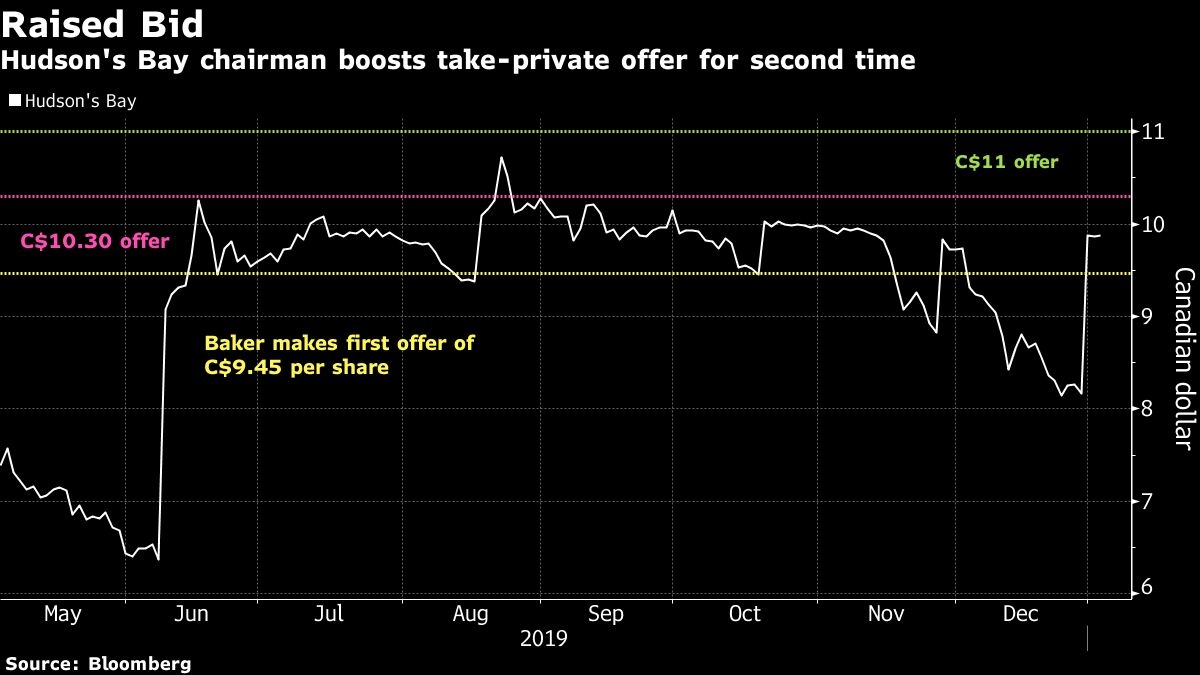 Catalyst, which owns a 17.5 per cent stake in the retailer, was a substantial hurdle for the controlling shareholders to overcome. The firm’s stake amounts to about 32 per cent of the minority shareholder votes, and while Baker now has its support, the deal isn’t done.

The private equity firm still has the right to terminate the agreement under certain circumstances, including if the amended circular for the planned February vote hasn’t been filed with regulators and mailed to shareholders by Feb. 14 or if it is substantially different than what has been communicated to Catalyst. The acquisition consortium also has to include fairness opinions from financial advisers of the special committees, and an updated circular that includes a formal valuation where the lower end of the range is equal to or less than $11 a share.

Baker has said he wants to let the Canadian retailer attempt a turnaround outside the glare of public markets. While it has reduced debt after selling assets in Europe, the company is still struggling to boost sales at its eponymous chain in Canada, the oldest company in North America. Saks has also recently showed signs of weakening. The luxury retailer last month posted its first same-store sales decline in at least eight quarters.

The sweetened offer may further boost shares, which gained more than 20 per cent this week after reports that Baker had approached minority shareholders about potentially raising the offer.

While the $10.30-a-share offer was approved by the board in October, preliminary tallies showed the Baker group had fallen short of the necessary support from investors to proceed with the transaction, according to people familiar with the matter.

Catalyst, which is run by Newton Glassman, had made its own proposal at $11 a share that was rejected by a special committee of the board because Baker’s group was adamant it wouldn’t tender its shares.

--With assistance from Linus Chua.