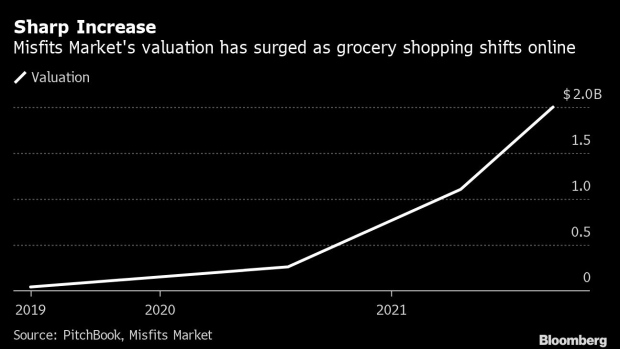 The startup, based in Philadelphia, is valued at $2 billion after a $225 million round led by SoftBank Vision Fund 2, the company said. This funding was an extension of a Series C headed by Accel announced in April that put a $1.1 billion value on the company. Overall, Misfits, founded in 2018, has raised $526.5 million.

Misfits offers organic produce, pantry staples and meats that would otherwise go to waste, often for cosmetic reasons, at steep discounts. Unlike many other online grocers, the company focuses on suburban and rural markets instead of urban ones. That had it well situated for the pandemic when Americans cooked a lot more from home and avoided physical stores, pushing millions to buy their food online for the first time.

As with the original round, the funding will be used to continue to boost growth, including adding five more states to its distribution so that it will cover the entire continental U.S. The company also plans to expand into dairy, frozen and prepared foods eventually, according to Chief Executive Officer Abhi Ramesh.

“The goal is to tackle every staple category we’re not in,” Ramesh said in an interview. This funding “is more ammo to continue on that trajectory.”

The company said it has experienced “tremendous” growth this year, but declined to give specific revenue numbers. Misfits said that the average order size is now above $52, more than doubling from when the business launched. Food inflation has helped the company draw even more customers because its simpler supply chain has helped it curtail price increases, Ramesh said.