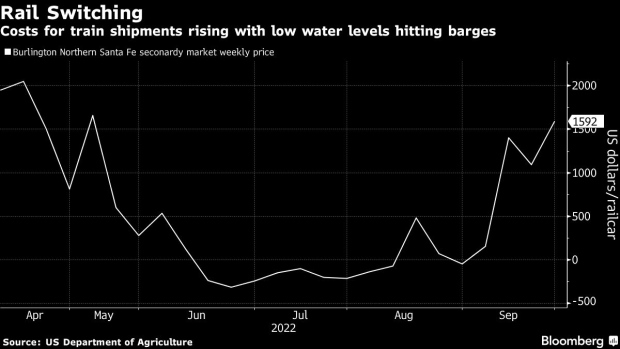 (Bloomberg) -- Shippers are scrambling for other ways to move goods after low water levels on the Mississippi River have forced barge companies to stop taking orders for immediate delivery of everything from metals to agricultural products to fertilizers.

Now, companies are paying a premium to move steel, aluminum and other goods by rail and truck, despite cost that are up to five times more than what they’d normally pay by barge. Shipments of coal and petroleum also have been rerouted, but these other modes of transportation aren’t an effective solution.

“In order to move the amount of freight that currently is in transit via barge on the Mississippi, it would require an immense amount of capacity that is unique from an equipment standpoint,” Charles Roth, an analyst at FTR Transportation Intelligence, said in a phone interview. “The trailers required to haul grain versus coal and versus bulk liquids are all different. There’s limited options for moving that freight.”

Nucor Corp., the largest US steelmaker, is not planning to load barges with steel shipments for a few weeks as the company looks to avoid having material stuck on the river and ensure on-time delivery, according to a person familiar with the decision. All of this comes as Ingram Barge Co., the largest US barge operator, declared force majeure on some shipments due to low-water conditions disrupting normal operations through the river.

The shipments are headed to effectively every sector in the US economy, from automobiles to appliances to grocery stores and restaurants. The depleted water levels are a key concern given the river basin produces 92% of the nation’s agricultural exports.

“The beauty of our navigable rivers is that they are capable of transporting heavy freight, like soybeans and grain, long distances in an economical manner” Mike Steenhoek, executive director of the Soy Transportation Coalition, said in an email. “One 15 barge tow has the same freight capacity as 940 semi-trucks. However, this efficiency is predicated on normal water conditions, which, unfortunately, do not currently exist.”

(Updates with comment from shipper group in final paragraph.)