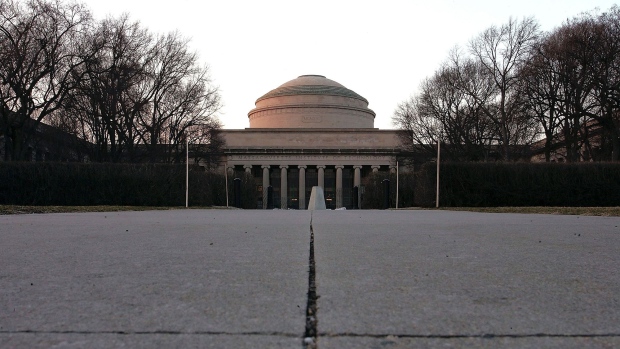 The Maclaurin Building is shown on the campus of the Massachusetts Institute of Technology in Cambridge, Massachusetts. , Photographer: Joe Raedle/Getty Images

(Bloomberg) -- A professor at the Massachusetts Institute of Technology who allegedly received funding from China was charged with failing to disclose his foreign contracts and awards to the U.S. Department of Energy.

Gang Chen, 56, a naturalized U.S. citizen from China, was charged with wire fraud, making a false statement in a tax return and failing to disclose a foreign bank account, according to the Justice Department.

Chen is the director of the MIT Pappalardo Micro and Nano Engineering Laboratories and the Solid-State Solar Thermal Energy Conversion Center, prosecutors said in a statement. Since 2013, his MIT research has been funded by more than $19 million in U.S. grants.

But since 2012, Chen has also held various appointments with China designed to promote its technological and scientific development. He provided expertise, sometimes directly to Chinese government officials and often in exchange for financial compensation, according to an affidavit by a Federal Bureau of Investigation agent involved in the case. Since 2013, Chen has received $29 million in foreign funding.

Robert Fisher, a lawyer listed in court filings as representing Chen, didn’t immediately respond to an email seeking comment on the charges.

“To put this threat into perspective, we have now reached the point where the FBI is opening a new China-related counterintelligence case about every 10 hours,” Joseph Bonavolonta, the FBI’s special agent in charge, said at a press conference in Boston on Thursday. “And of the 5,000 active counterintelligence cases the FBI has, nearly half of them are related to China.”

“But let me be clear,” Bonavolonta added. “We are not suggesting that all, or even most, Chinese students, professors and researchers are somehow up to no good.”

Chen’s field of research, nanotechnology, was identified in China’s 13th Five-Year Plan as “a particular area of interest” to the government, according to the affidavit. His nanoengineering group at MIT focuses on “nanoscale transport and energy conversion phenomena,” which has applications in energy storage, conversion and utilization.

Chen “has made important contributions to the understanding of heat conduction in nanostructures, and his research has advanced a wide range of technologies,” according to the filing.

FBI agents arrested Chen on Thursday morning at his home in Cambridge and immediately executed three search warrants, Bonavolonta said, one at Chen’s home and two at MIT.

Since 2012 Chen has entered into at least four contracts “with various entities within or closely affiliated with” the Chinese government, including the National Natural Science Foundation of China, Zhongguancun Development Group and the Outstanding Talent Plan at the Chongqing No. 2 Foreign Language School in China, the U.S. says.