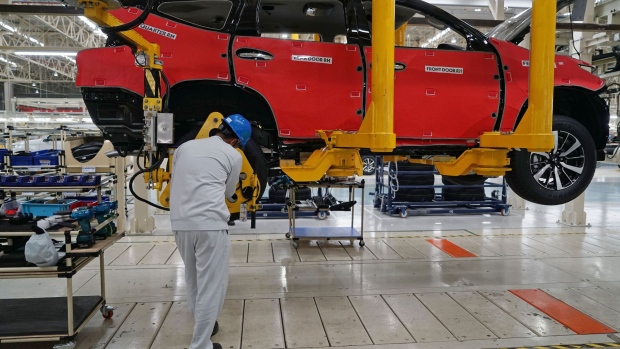 An employee works on the wheel of a Mitsubishi Motors Corp. sports utility vehicle (SUV) on a production line at the company's plant in Cikarang, Indonesia, on Tuesday, April 25, 2017. Mitsubishi Motors may supply its new multipurpose vehicle to Nissan Motor Co. in Indonesia by 2019, as the alliance partners explore ways to enhance cooperation and exploit synergies. Photographer: Dimas Ardian/Bloomberg , Bloomberg

(Bloomberg) -- Mitsubishi Motors Corp. is considering producing cars at Renault SA facilities in France in what would be a reversal of last year’s decision to pull back from Europe, according to a person familiar with the matter.

The Japanese manufacturer could finalize the plan as soon as Thursday, said the person, who asked not to be named because the information isn’t public. The Financial Times reported the deliberations earlier Tuesday.

Mitsubshi last year unveiled a restructuring plan -- dubbed “Small Is Beautiful” -- that includes freezing the launch of new products in Europe, cutting fixed costs by 20% and focusing on Southeast Asia, one of its strongest markets. Its efforts to turn around have put a strain on its partnership with Renault and Nissan Motor Co., while the death last year of its former chairman, Osamu Masuko, dealt a further blow.

Mitsubishi has long struggled in Europe, where its market share has stagnated around 1% for more than a decade. The Japanese manufacturer sold a factory in the Netherlands in 2012.

The three-company alliance has been pursuing plans for deeper cooperation in developing and building vehicles to weather a collapse in demand for its cars. Nissan said earlier this month it would make future small commercial vans at Renault’s Maubeuge plant in northern France.

Renault, meanwhile, is shedding thousands of jobs in France, where Chairman Jean-Dominique Senard has said factories are underutilized.

The partnership is still reeling from the 2018 arrest in Japan of former leader Carlos Ghosn, which revealed deep divisions between Renault and Nissan and management turmoil. Renault owns 43% of Nissan, which in turn holds a 34% stake in Mitsubishi.