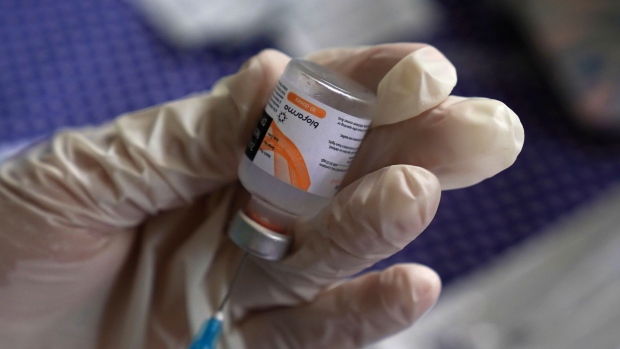 A healthcare worker prepares a dose of the Sinovac Biotech Ltd. Covid-19 vaccine during a vaccination drive at the SD Cinere III elementary school in Jakarta, Indonesia, on Tuesday, Dec 21, 2021. Indonesia's vaccination program has fallen behind its neighbors with less than 40% of people fully inoculated, rendering it more fragile to another resurgence. , Bloomberg

People who had two doses of the Covid-19 vaccine made by China’s Sinovac Biotech Ltd. should get boosted with a different shot to amp up their protection against omicron, according to a study by researchers from Brazil and the University of Oxford.

The research, published Friday in The Lancet, tested booster combinations on 1,240 people from Brazil above 18 years old who had been immunized with Sinovac’s shot, one of the most widely used globally, six months prior. While those who received a third Sinovac dose did experience a boost in antibodies 28 days later, the level of improvement was found to be much higher in people who were boosted with vaccines from Pfizer Inc., AstraZeneca Plc, or Johnson & Johnson.

The “mix-and-match” booster approach induced stronger antibody protection against both delta and omicron, compared with a third dose of Sinovac’s vaccine, known as CoronaVac, the study showed. This is in line with findings from other studies that support so-called heterologous boosting schedules.

Evidence that Sinovac’s booster increases antibody levels at all is good news for the company, as well as for China and the rest of the developing world, where the product is the vaccine of choice. The Chinese company said at the end of last year it was bracing for a revenue slump as several studies raised doubts about the efficacy of its vaccine against omicron, even after a booster shot. Still, the other combinations were better.

The data show the “extraordinary response to a third dose of coronavirus vaccines in a heterologous vaccine schedule,” said Sue Ann Costa Clemens, director of the Oxford Vaccine Group in Brazil, adding: “These data will also guide other low- and middle-income countries in setting up the most optimal and affordable booster programs.”

The Pfizer booster increased antibodies 152 times, the biggest rise across all shots studied. The increase from a third CoronaVac dose was 12-fold.

Sinovac and Sinopharm, the other major Covid shot provider in China, both rely on more traditional, inactivated vaccine technology, whereas Pfizer uses the newer messenger RNA tech in their inoculations.

Neutralizing capacity against omicron was induced for almost all those who mixed CoronaVac with another vaccine. In contrast, researchers said only about a third of those boosted with Sinovac’s shot had detectable levels of neutralization against the latest variant.

The study also found all boosters are safe as follow-ups to two doses of CoronaVac. One person boosted with the Johnson & Johnson shot and two receiving Pfizer suffered serious adverse effects potentially linked to the vaccine, but all recovered completely.

One of the study’s limitations is that it didn’t measure T-cell immunity, which would give an indication of protection against severe disease.