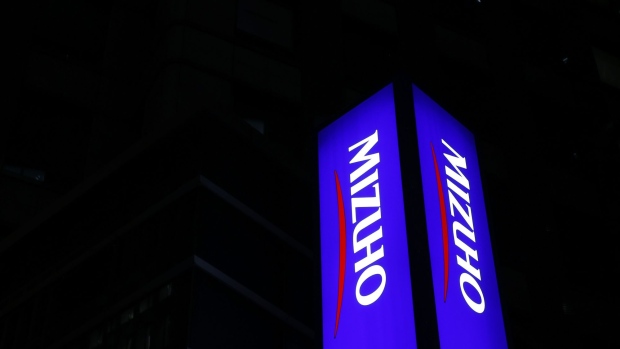 (Bloomberg) -- Mizuho Financial Group Inc. agreed to buy a minority stake in Rakuten Group Inc.’s online securities arm for 80 billion yen ($552 million), the latest move by a Japanese bank to team up with a technology company and bolster digital services.

The Japanese lender’s brokerage unit will buy almost 20% of Rakuten Securities Inc., the companies said on Friday. The transaction is scheduled to be completed in November.

The deal comes after billionaire Hiroshi Mikitani’s e-commerce giant this year announced plans to separately list its securities and banking businesses, which have been supporting earnings after a foray into Japan’s mobile market led to losses and put a strain on cash.

Rakuten shares have climbed about 4% since news of the deal emerged on Wednesday, paring this year’s decline to 41%. Mizuho is little changed in the past two trading sessions.

Japan’s biggest banks have been struggling to build scale in their online securities businesses and compete with industry leaders like SBI Holdings Inc. and Rakuten. Sumitomo Mitsui Financial Group Inc. in June agreed to take a 10% stake in SBI, the country’s largest internet brokerage.

S&P Global Ratings said Mizuho’s investment will help increase revenue for Japan’s third-largest bank since it should expand its base of younger customers who are beginning to build their nest eggs.

“Rakuten Securities and Mizuho Securities aim to leverage the power of attracting customers from a wide range of generations,” the companies said. They plan to collaborate in areas including asset management consulting and equity and bond offerings arranged by Mizuho.

Rakuten Securities has about 8 million accounts, compared with SBI’s 8.8 million at the end of June, according to the companies. Like other Rakuten Group businesses, the brokerage has taken advantage of the internet retailer’s popular loyalty points program to attract customers.

After media including Bloomberg reported Mizuho’s investment this week, Natsumu Tsujino, an analyst at Mitsubishi UFJ Morgan Stanley Securities Co., said a price tag of 80 billion yen for a 20% stake was too expensive.

Tsujino said Japan’s online brokerage industry is likely to face tough competition ahead, given SBI’s plan to scrap trading fees for domestic equities. She also said Rakuten’s profit is likely to be affected by a recent suspension of structured bond sales.

(Updates with Rakuten statement in fourth paragraph and shares in fifth)