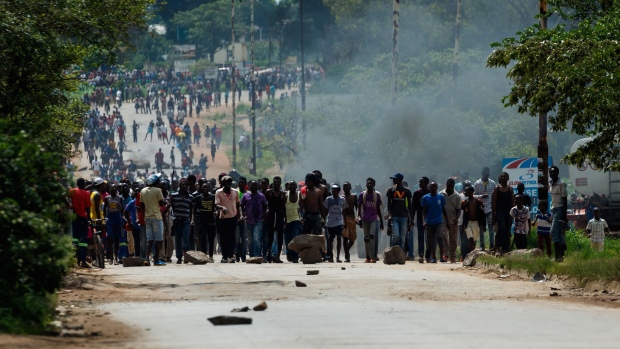 (Bloomberg) -- Zimbabwean President Emmerson Mnangagwa is being defied by members of his ruling party who are orchestrating a violent crackdown after demonstrations this month despite his vow to act against abuses by the security forces, government and military officials said.

Door-to-door raids in urban townships by police and men in military uniform are continuing more than a week after a three-day stay-away was called following a more than doubling of fuel prices, the people said on the condition of anonymity. Abuses range from beatings to rape, according to human rights organizations including the Crisis in Zimbabwe Coalition.

The continuing crackdown signals a split in the Zimbabwe African National Union-Patriotic Front. Mnangagwa, a former spy chief, is trying to court investors to rescue an economy close to collapse. Opposing him are military and party officials who want to retain tight control after ousting long-time ruler Robert Mugabe in late 2017 and benefit from illicit diamond sales, access to scarce hard currency and control over lucrative fuel imports, the people said.

“The reform agenda is being opposed by hard-line elements within Zanu-PF and the state,” said Piers Pigou, senior consultant for Southern Africa at the Brussels-based International Crisis Group. “They say it’s a liberal agenda that will not provide a broad-based solution for Zimbabweans.”

The crackdown has jarred with Mnangagwa’s promise of a “new Zimbabwe” of economic recovery and tolerance of the opposition. It comes after an independent commission of inquiry found that Zimbabwe’s security forces had acted recklessly when they killed six during an August post-election protest.

Live ammunition was again used against civilians this month, with at least 12 people killed, many from gunshot wounds, while 78 were wounded by gunfire, according to the Zimbabwe Association of Doctors for Human Rights.

Mnangagwa’s problem stems from his obligation to Zanu-PF and the military backers who supported his ascension to power.

Vice President Constantino Chiwenga, a retired general, commanded the Zimbabwe Defence Forces that placed Mugabe and his wife Grace under house arrest and helped force his resignation before an emergency sitting of parliament in 2017. Chiwenga was made vice president almost immediately after Mnangagwa took over.

The officials said a climate of mutual wariness exists between Mnangagwa and Chiwenga. While Chiwenga sees no reason for Zanu-PF’s hold on power to change, Mnangagwa can’t see how he can rescue a crippled economy without liberalizing it and wooing foreign investment to a country with the world’s second-biggest platinum and chrome reserves.

Those who are defying Mnangagwa know that he will take the blame, either directly or because he’s failing to rein them in, the officials said. The president’s only hope is to persuade them to accept harsh economic reality -- or fire them, they said.

“This is a result of the division. It’s a good cop, bad cop routine,” Pigou said. “While there may be hard-line elements, it’s his government. He has chosen the cabinet.”

--With assistance from Antony Sguazzin.

To contact Bloomberg News staff for this story: Brian Latham in Harare at blatham@bloomberg.net

To contact the editors responsible for this story: Karl Maier at kmaier2@bloomberg.net, Antony Sguazzin