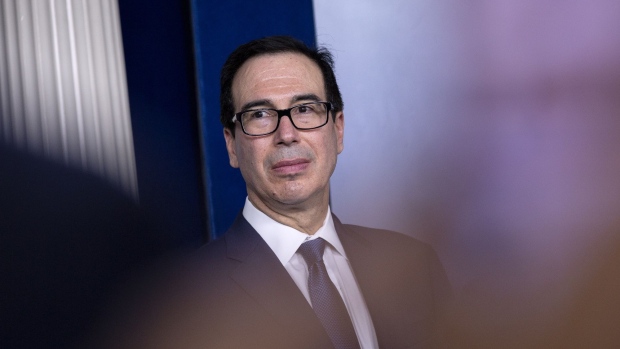 Steven Mnuchin, U.S. Treasury secretary, listens during a news conference in Washington, D.C., U.S., on Monday, March 9, 2020. President Donald Trump said Monday he will seek a payroll tax cut and "very substantial relief" for industries that have been hit by the virus, reversing course on the need for economic stimulus hours after markets posted their worst losses in more than a decade. , Saleha Mohsin

Treasury Secretary Steven Mnuchin and House Speaker Nancy Pelosi both said there’s been progress toward a COVID-19 relief deal, but negotiations continue to be bogged down by differences over shielding employers from liability for COVID-19 infections.

“We had a very productive call yesterday with a lot of people, so I think we’re making a lot of progress,” Mnuchin told Bloomberg News ahead of a congressional hearing Thursday morning. “There’s more discussions going on today.”

Pelosi said the bipartisan group of lawmakers offering a compromise proposal are making “great progress” in their talks, though they still haven’t found a solution on the liability shield that Senate Majority Leader Mitch McConnell wants but that Democrats oppose.

Mnuchin has made his own proposal for a US$916 billion relief plan, and he said a “majority” of its provisions are the same as the bipartisan plan, worth US$908 billion. The Treasury chief’s plan includes US$600 stimulus payments for individuals, and excludes US$300 per week in supplemental unemployment benefits, two key differences with the alternative. It also has what he termed “robust” liability protections for employers.

Pelosi insists the best chances for a deal are the bipartisan Senate talks where a handful of rank-and-file Republicans are open to just a moratorium on liability lawsuits instead of the broader changes to the law that McConnell wants.

At a meeting of aides to all four top congressional leaders late Wednesday, members of McConnell’s staff said the Senate leader sees no possible path to an agreement on state and local aid and on liability reached by the bipartisan group of senators that would be acceptable to Republicans, according to a senior Democrat familiar with the discussions.

A spokesman for McConnell declined to comment. McConnell also suggested dropping the liability provisions in exchange for Democrats giving up on including aid to states and localities, which Pelosi and Senate Democratic Leader Chuck Schumer have refused.

Congress has about a week to reach an agreement, write legislation and get it passed by the House and Senate. Adding to the urgency, deaths in the U.S. from COVID-19 surpassed 3,000 a day for the first time, and a report Thursday showed an unexpected surge in weekly jobless claims, suggesting that widening business shutdowns amid a surge in the spread of virus are spurring fresh job losses.

Schumer said Thursday that the bipartisan plan is ”the only game in town” because it has enough support to pass Congress. McConnell wants to defer to the White House offer, believing only the muscle of President Donald Trump, who hasn’t publicly weighed in, will sway most Republicans to back a trillion dollar aid package.

McConnell, speaking on the Senate floor Thursday, again accused Democrats of holding the relief bill, including more aid to small businesses, “hostage.” And he reiterated that the liability shield is a critical need, saying 6,500 COVID-related lawsuits have already been filed.

“Our Democratic colleagues want to pretend they’re bravely fighting big corporations but they’re really bullying small business owners and college presidents who have been pleading for these protections for months,” McConnell said.

Lawsuits have been filed in multiple states claiming companies, including McDonald’s Corp, Amazon.com Inc. and Smithfield Foods Inc., aren’t doing enough to keep workers and their families free of coronavirus.

Schumer rejected any tie between the liability shield and the aid for states and localities. He said the state and local assistance has bipartisan backing while a liability provision is a GOP-only demand.

Senator John Cornyn, a Republican from Texas, said an enhanced pause on liability relief won’t work. “It sounds like kicking the can down the road to me,” Cornyn told reporters Thursday.

A deal for state and local government aid also is close, but there is debate over the formula to distribute aid based both on population and revenue loss.

The clock is ticking, with lawmakers working toward a year-end spending deal by Dec. 18 that could contain any final pandemic aid for the year -- a package many see as an important bridge before a renewed debate for further help after President-elect Joe Biden takes office in January.

History suggests that if a 2020 relief deal does get done, it is likely to come together rapidly and at the very last minute. House GOP leader Kevin McCarthy said on CNBC Thursday that “I think next week will be the week we get it done.”

House Majority Leader Steny Hoyer said he is instructing members to return to the Capitol on Tuesday. “We’re just waiting to get an agreement that we can pass,” he said in an interview. “They don’t have an agreement today,”

Pelosi said Thursday that Congress could still be in Washington after Christmas discussing virus-related relief.

A group of 32 House Republican members in a Dec. 9 letter called on the top four congressional leaders of the two chambers to “guarantee a vote will be held on an emergency relief bill” in the current session. Led by Tom Reed, a co-chief of the bipartisan Problem Solvers group, they said the US$908 billion plan is the framework that’s capable of becoming law.