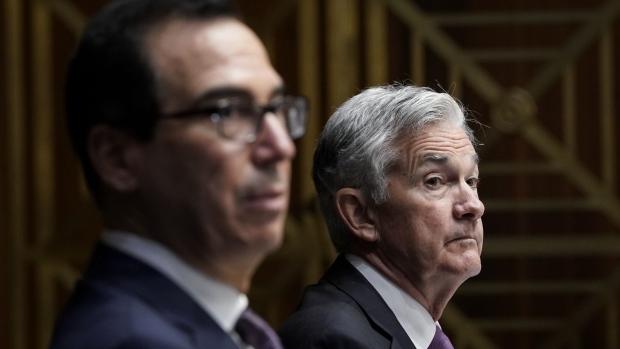 The top two U.S. economic policymakers clashed over whether to preserve emergency lending programs designed to shore up the economy -- a rare moment of discord as the nation confronts the risk of a renewed downturn spurred by the resurgent coronavirus.

The disagreement erupted late Thursday when outgoing Treasury Secretary Steven Mnuchin released a letter to Federal Reserve Chair Jerome Powell demanding the return of money the government provides the central bank so it can lend to certain markets in times of stress. Minutes later, the Fed issued a statement urging that “the full suite” of measures be maintained into 2021.

“This is a significant and disturbing breach at a critical time for the economy,” said Tony Fratto, who worked at the Treasury and the White House during the George W. Bush administration. “We need all the arms of government working together and instead we’re seeing a complete breakdown,” he said, noting that Washington remains at an impasse on fiscal stimulus as well.

Investor reaction to the split was swift amid fears the decision will unsettle markets and impede the economic recovery: futures on the S&P 500 Index were down 0.5 per cent in early Friday trading in Europe, with haven demand sending Treasuries higher and pulling down yields.

Treasury chiefs and Fed chairs typically coordinate closely at times of crisis, appearing jointly before Congress and working in lockstep to ensure funding markets run smoothly. The two agencies were tightly linked in the bailouts of the financial and auto industry more than a decade ago. And they united again in the March 2020 Cares Act economic rescue package, which appropriated cash for the government to finance Fed backstops for everything from municipal to corporate finance after markets buckled when the pandemic hit.

Now, Mnuchin wants some of the money back, arguing many markets are no longer at risk of seizing up and so don’t need further aid beyond next month. In his sights are facilities which sought to ease corporate credit and municipal-borrowing and also offered loans to small and medium-sized businesses. He asked that four other programs be kept in place for an additional 90 days.

“Financial conditions are quite strong,” Mnuchin said in an interview. “The good news is, the markets have recovered significantly,” he said. Companies don’t need more loans, and instead require more grant money, which requires action from Congress, he said.

The Fed has argued that the lack of take-up for some of the programs is a sign they’ve worked.

Mnuchin said that the purpose of his announcement was not to put the Treasury against the Fed, and that he was merely carrying out the law prescribed by the Cares Act. The facilities could be re-activated if needed with either congressional support or with other funds available to the Treasury, he said.

“It appears the Fed may be reading the legislation differently,” said Michael Feroli, chief U.S. economist at JPMorgan Chase & Co.

The risk is that divisions between the key economic players undermines confidence at a time when growth is flagging. Fed Bank of Dallas President Robert Kaplan said on Bloomberg TV Thursday that there’s the potential for gross domestic product to shrink this quarter and even next.

The economy is also set to go without fiscal stimulus: Republicans and Democrats remain deadlocked on a new package, and measures including extended unemployment benefits are set to expire next month.

“I was a bit surprised” at the Treasury’s statement, Raphael Bostic, president of the Fed Bank of Atlanta, told Bloomberg TV. “Given where the economy is -- and there’s so much uncertainty still out there -- it’s prudent to keep those things open so that when people, if they do have stress, they can draw upon it.”

Among the initiatives that will now no longer be able to extend new credit are two Fed facilities that allowed it to buy corporate bonds for the first time. They helped to unfreeze that market, even before the effort was up and running, and businesses have since logged record amounts of debt issuance.

Another, the Main Street Lending Program, has had a slow start, and the Fed recently loosened its terms to help encourage banks and smaller businesses to participate.

Powell himself said at a virtual conference on Tuesday that the time to discontinue the lending facilities was “not soon,” highlighting that typically the central bank keeps its backstops in place for some time after a crisis hits. He has repeatedly praised the Cares Act for what he’s described as “essential” support amid the historic collapse in GDP in the spring.

The U.S. Chamber of Commerce called for a reconsideration of Mnuchin’s decision.

“We strongly urge these programs be extended for the foreseeable future and call on Congress to pass additional pandemic relief targeted at the American businesses, workers and industries that continue to suffer,” the chamber said in a statement.

The sun-setting of some of the facilities will now build expectations for the Fed to take some other policy action when it wraps its next meeting on Dec. 16, said Ben Emons, managing director of global macro strategy at Medley Global Advisors.

“The market will now speculate the Fed may have to increase Treasury purchases and/or extend maturities” of the securities it buys through its main asset-purchase program, Emons wrote in a note.

President-elect Joe Biden’s administration could seek to renew the facilities, or press Congress to authorize fresh funding for them, when it takes office in January. Biden said Thursday that he’s made a decision on who he will nominate as Treasury secretary. Republicans in Congress have said the billions of dollars sent to the central bank can be deployed better elsewhere.

Biden’s Treasury could agree to restart the facilities, as Mnuchin pointed to, using the Exchange Stabilization Fund. But meantime, markets may need to contend with going “without a net” for several weeks, Feroli wrote in a note.

“For about three weeks in January the markets will be operating without the backstop they’ve had since the spring,” Feroli wrote.

--With assistance from Kathleen Hays.