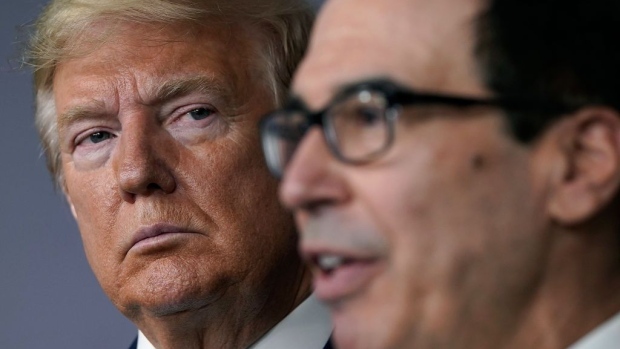 WASHINGTON, DC - MARCH 17: (L-R) U.S. President Donald Trump listens to Secretary of the Treasury Steven Mnuchin speak during a briefing about the coronavirus in the press briefing room at the White House on March 17, 2020 in Washington, DC. The Trump administration is considering an $850 billion stimulus package to counter the economic fallout as the coronavirus spreads. (Photo by Drew Angerer/Getty Images) , Photographer: Drew Angerer/Getty Images North America

Treasury Secretary Steven Mnuchin said the coronavirus outbreak has hurt U.S. airlines worse than the Sept. 11 terrorist attacks, and he and President Donald Trump promised federal aid to the industry and suppliers, including Boeing Co.

“This is worse than 9/11 for the airline industry, they are almost grounded to a halt,” Mnuchin said at a White House news conference alongside Trump. “The president wants to make sure that although we don’t want people to travel unless it is critical, we want to maintain for critical travel the right to have domestic travel.”

The U.S. airline industry on Monday asked the government to provide almost US$60 billion in grants and loans. It is unclear how much Trump will sign on for, according to a person familiar with the matter. The administration is most likely to approve loans, but the Office of Management and Budget has yet to be asked to provide cost estimates, the person said.

The assistance could be included in a White House proposal to ask Congress for as much as US$1.2 trillion in spending.

“Airlines have a short-term liquidity issue,” Mnuchin told reporters Tuesday on Capitol Hill after meeting with Senate Republicans on the spending plan.

He said he’s also discussed helping hotels and the travel sector as a whole with House Speaker Nancy Pelosi and Senate Republicans.

Trump said that “the airline industry will be in good shape.” He later added that he is considering unspecified aid to the industry, specifically Boeing Co., the country’s largest plane maker and a vital exporter.

“Boeing got hit hard in many different ways,” he said. “I think it is going to be outstanding, but we have to protect Boeing. We have to help Boeing. Obviously when the airlines aren’t doing well, Boeing is not going to be doing well. So we’ll be helping Boeing.”

Mnuchin declined to describe specific aid the administration is considering. “We are very focused,” he said. “There are a lot of workers. This is strategically important to us, and we will be working with Congress.”