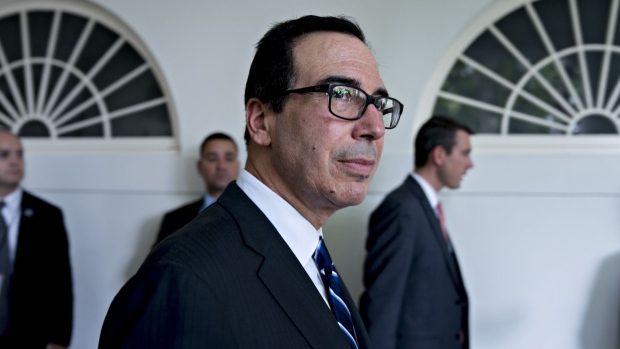 Treasury Secretary Steven Mnuchin said he and U.S. Trade Representative Robert Lighthizer may travel to Beijing for trade negotiations if talks by phone this week are productive.

“We expect to have another principal-level call this week, and to the extent we make significant progress, I think there’s a good chance we’ll go there later,” Mnuchin said Monday at a briefing for reporters at the White House.

The planned phone call would be the second time the top trade negotiators have spoken since U.S. President Donald Trump and his Chinese counterpart Xi Jinping called a truce in their year-long trade war during the G-20 meeting at the end of June. The leaders agreed to restart talks for a trade deal -- which had collapsed in May -- but they gave no concrete time-frame to reach a deal.

Earlier Monday, Trump indicated the U.S. tariffs on China were having their intended impact by squeezing China’s economy, tweeting, “The United States tariffs are having a major effect on companies wanting to leave China for non-tariffed countries. This is why China wants to make a deal.”

Trump’s comments came hours after China released figures showing growth in the world’s second-largest economy slowed to 6.2% in the second quarter, the weakest pace since at least 1992 when the country began collecting the data.

Meanwhile, Trump last week complained that China wasn’t following through on a promise that Xi made at the G-20 meeting to increase purchases of American farming products. China, for its part, has since said it’s considering buying more U.S. soybeans, corn and pork as a cooperative gesturebut that total volumes will depend on the progress of the trade talks.

During the last detente in December, China had committed to buying over 20 million tons of U.S. soy, pork and corn. After talks fell apart in May, China said it would continue with the purchases, though it did ask for some shipments to be delayed.

Despite the trade dispute, Trump said Xi is a friend of his. “I used to say he’s a good friend of mine, probably not quite as close now,” Trump told reporters Monday at the White House. “But I have to be for our country. He’s for China and I’m for the U.S.A., and that’s the way it’s gotta be.”

Mnuchin also said he’s “hopeful” that Congress will approve the USMCA, the successor to the North American Free Trade Agreement. Trump said on Monday that if Democrats block the United States-Mexico-Canada Agreement he will resort to “Plan B,” without elaborating.