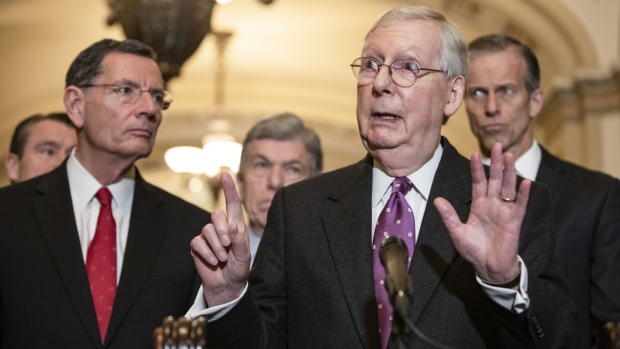 Treasury Secretary Steven Mnuchin and Senate Democrats are pushing to expand the Senate GOP’s economic rescue plan in emergency talks Friday, with all sides under pressure to reach a deal by the end of the day on a package expected to exceed US$1 trillion ahead of a vote on Monday.

Senate Democratic leader Chuck Schumer wants an expanded package that would spend far more on workers and on responding to the health care crisis, while Mnuchin wants more to bolster the economy, including direct payments to more Americans, according to people familiar with his thinking.

“I’ve tasked the bipartisan team to reach an agreement by the end of the day today,” McConnell said.

Getting a deal done Friday would give bill drafters Saturday to write up the text, with McConnell planning a Monday vote, though a few lawmakers have questioned whether such an ambitious deadline for such a complex package could be met.

The package appeared likely to grow during the negotiations even though the U.S. budget deficit was already set to hit US$1 trillion this year before the outbreak.

“We’re talking about a bill that at minimum is a trillion dollars,” said Eric Ueland, the White House legislative liaison. “I understand the potential for the deficit impact. But the deficit impact is not a barrier to the need to act on behalf of the American people.”

Trump, at a White House briefing, indicated he’d be willing to come back to Congress again for another round.

“I want to get workers money,” Trump said, adding if there’s not enough money in this round of stimulus, “we’ll do something later, I’m sure.”

The impact of the virus is roiling markets worldwide. The S&P 500 Index tumbled to its lowest in three years, ending the week down 15 per cent. The European Union said the recession this year may be as bad as 2009, and Goldman Sachs warned the U.S. economy may shrink 24 per cent on an annualized basis in the second quarter.

McConnell and Schumer have each proposed their own sweeping plans, and four groups of senators are meeting at bargaining tables behind closed doors. House Speaker Nancy Pelosi spoke by phone with Mnuchin and is funneling House Democratic priorities to Schumer, according to a House leadership aide.

Read More: Mnuchin and Pelosi Are Most Pivotal Duo in Virus-Hit Capital

The GOP proposal includes tax rebates of US$1,200 for middle-income individuals, US$208 billion worth of loans for companies suffering due to the coronavirus pandemic and another US$300 billion aimed at helping smaller businesses.

Mnuchin has proposed two US$1,000 checks at a cost of about US$500 billion -- substantially more generous than McConnell’s bill.

The House of Representatives, meanwhile, remains out of session. With Pelosi working through Schumer, the main negotiating in the Capitol this weekend will be senator to senator.

“On first reading, it is not at all pro-worker and instead puts corporations way ahead of workers,” Schumer said of the legislation McConnell unveiled Thursday.

Democrats are seeking to add more aid for hospitals and other health-care facilities that are increasingly burdened by patients with the virus, as well as bolstering unemployment insurance for those being laid off as businesses shut down or drastically scale back.

Schumer and Trump spoke at about 11 a.m. and then again at 11:18 a.m., according to a Schumer spokesman.

Schumer urged Trump to immediately use the Defense Production Act to get ventilators and other important equipment. Trump said at a White House briefing that he was doing that.

Schumer also brought up several other Democratic priorities, including massive aid for hospitals to respond to the crisis and dramatically expanded unemployment insurance payments, expanded paid sick and family leave and canceling student loan debt for the duration of the crisis.

Trump was generally supportive of most ideas and didn’t reject any of the others, according to Schumer’s office.

Asked at the White House briefing whether he and Schumer are on the same page, Trump responded, “We’re not so far away.”

“Obviously Republicans have some ideas, Democrats have others but that’s the way the system works. We’re trying to put them together today,” Republican Senator Lamar Alexander of Tennessee said.

Meanwhile, the powerful U.S. Chamber of Commerce praised the bill as a good start, but was planning to send a letter to Congress suggesting a program for loans to midsize and larger employees, Chief Policy Officer Neil Bradley told reporters on Friday.

Bradley outlined a program for businesses of over 500 employees that have revenue losses of at least 10 per cent due to the virus. The loans would be federally guaranteed and paid back over five years, and a portion would be forgiven for maintaining a certain level of head count.