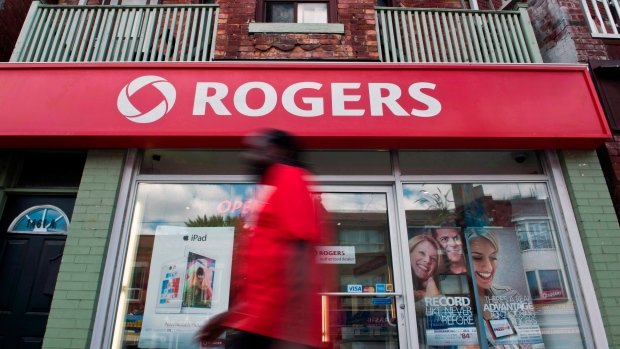 A man walks by a Rogers store in Toronto , The Canadian Press/Galit Rodan

TORONTO -- Sales of mobile phones have been "very quiet" and likely won't pick up until customers return to stores and malls that have been temporarily closed due to the pandemic, the head of Canada's largest wireless business said Wednesday.

"We really don't expect the market to re-activate in any material way until the public feels comfortable going to stores, returning to malls," Rogers chief executive Joe Natale said at a virtual conference for the telecommunications and media industries.

"We're watching that carefully. We're adapting province by province as it's different in each province across the country."

Rogers has opened about 90 stores in each of the past three weeks, Natale said.

"But volumes are still down," he said. "It's just quiet. Very quiet out there. We'll see what happens as we enter the busier half of the year and people feel more comfortable shopping."

BCE chief executive Mirko Bibic, the head of Bell Canada, had said it has had a "hodge-podge" of experiences with its store re-openings because provinces are at different stages of loosening their pandemic restrictions.

"Every day that goes by, it get's a little more active. But it's so early . . . that I can't discern a trend from what we've seen so far," Bibic said.

Telus chief financial officer Doug French said its retail stores are starting to re-open but noted that the closures had the advantage of reducing churn, which occurs when a carrier loses customers.

French said Telus did see "relatively good traction" serving customers with its digital sales channels but subscriber additions were down "and that will continue to flow through in the second quarter from what we can see today."

Analysts have been asking Canada's telecommunications companies whether they'll experience a significant increase in unpaid bills due to the economic impact of the pandemic, which prompted stay-at-home orders and temporary business closures.

Bill payments have been steady at Rogers until now, but higher unemployment levels during the pandemic will likely have an impact, Natale said.

"Our receivable metrics have been holding strong so far. We're seeing a little bit of impact but not a lot yet," Natale said.

"We're starting to see an increase in the number of calls, people calling to talk about bill payments, calling to understand what flexibility they might have. I think we'll see that increase as unemployment rises and that's really a direct reflection of what happens with people's financial position overall."

Natale said the slower pace of phone sales has reduced costs for Rogers, which spent about $2 billion in 2019 to subsidize customer phone purchases.