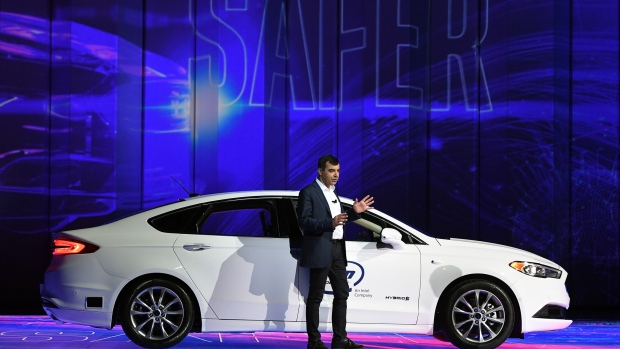 Intel Chief Executive Officer Bob Swan rode a Mobileye autonomous car through Jerusalem congestion Sunday with pedestrians crossing the street and traffic going both ways, on and off ramps and through roundabouts.

“The most impressive thing is to just to see how far they have come in each one of the successive drives that I have gone on over the last two years,” said Swan, adding that it was his third ride in a self-driving car.

Intel announced last October that Mobileye, along with Volkswagen AG and Champion Motor Group Inc., is working to commercialize a robo-cab service. Swan said Sunday the plan is to deploy the self-driving ride-hailing service in Israel first, then expand globally. Software development is expected to be completed by the end of this year.

Mobileye is a bright spot among Intel’s business lines as the company heads for its first annual sales decline in four years. The chipmaker has said data-center customers have slowed purchases of server processors as they deal with an inventory overhang, and analysts have expressed concern the company is losing market share.

Mobileye, which Intel purchased for $15 billion in 2017, was an early pioneer of vision systems that allow vehicles to recognize hazards. The company says it has more systems deployed on the road than its rivals, giving it a head start in the race toward fully autonomous cars.

Billions of dollars are pouring into the field as carmakers and technology giants battle to be the first to bring driverless cars to the masses and Mobileye sees an opportunity to take a significant portion of what it says is a nearly $300 billion market. Alphabet Inc.’s Waymo Llc is among Mobileye’s top competitors in the field.

Asked after Sunday’s test if he expected to see large numbers of self-driving cars on the road in the next five years, Swan said: “I will say I am more encouraged by what I experienced today than I was a couple of years ago.”

Swan also said Intel is launching a 20-week program to aid early-stage Israel startups working on artificial intelligence and autonomous system technologies. The program, called Ignite, is part of a strategy to re-invent “what it means to power a world where computing is really pervasive and contributes profoundly to our quality of life,” Swan said.

Intel started operations in Israel in 1974 and together with Mobileye now has more than 12,000 people here, making it one of the country’s largest employers. Last year Intel exported $4 billion worth of products from Israel, and Finance Minister Moshe Kahlon said in January the company is planning a new $11 billion plant in Israel.

Ignite will start operations later this year with as many as 15 hardware, software and services companies. Intel plans to expand the program to additional countries.

(The spelling of Intel CEO’s name was corrected in a previous version of this story.)

To contact the reporter on this story: Gwen Ackerman in Jerusalem at gackerman@bloomberg.net